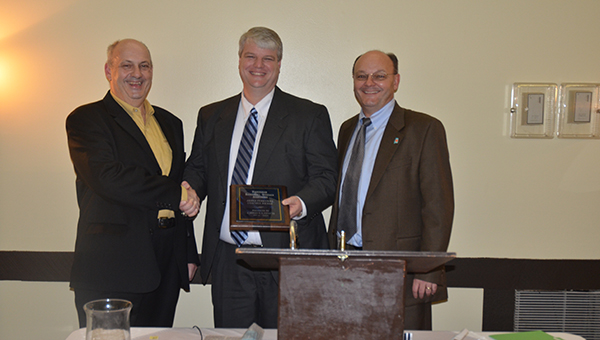 BIRMINGHAM–Helena head basketball coach Chris Laatsch recently completed his first year coaching the Helena Huskies boy’s varsity basketball team where he guided the team to the AHSAA Sub-Regional 5A Tournament appearance in the first year the program has been in existence.

Another impressive feat Laatsch’s team achieved was that they were the first team in history to qualify for the state tournament being a first-year program.

Coaches from around the Birmingham area attended the awards banquet at the Grayson Valley Country Club presented by the Birmingham Basketball Officials Association.

Bobby Stewart, president of the BBOA gave some background information on the award and how important it is for coaches and the officials association to have a great partnership.

“We named an award called the James Perryman Coaches Award and what we try and do every year is recognize a coach that has partnered with us over the years to fulfill that task because we don’t have coaches that embrace younger officials and give them opportunities like coach Burdette and coach Laatsch have done and some of our coaches here tonight,” said Stewart. “We’re never going to grow and we’re never going to get better if we don’t have this partnership.”

Laatsch was humbled to receive the award with his family at his side.

“I appreciate the opportunity to be here and partnership is a really nice word that means a lot to me because without a partnership we can’t do what we do and we believe basketball is a vehicle to train young men and for them to be great husbands and great fathers one day,” said Laatsch.

Laatsch ended by joking that in 21 years of coaching, he has never received a technical foul until this season.

“Sometimes intense moments happen,” said Laatsch. “I got my first technical in 21 years and now I’m up here receiving this award so I don’t know, maybe I should get another one,” Laatsch said with a laugh that received applause from the many referees in attendance.