PELHAM – A 22-year-old Homewood man is facing up to life in prison after he was charged with allegedly robbing a victim at gunpoint at a Pelham trailer park in October 2014. 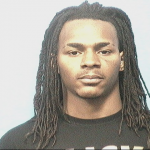 Arthur Peter Alexis III, who lists an address on Aspen Court in Homewood, was taken into custody on March 2 and charged with one felony count of first-degree robbery.

Alexis’ arrest came after the Pelham Police Department issued a warrant for his arrest in October 2014. The suspect’s arrest warrant claims he was involved in robbing a man in Pelham’s Greenpark South Mobile Home Park on Oct. 9, 2014.

The victim was allegedly robbed outside of his home, police said previously. No injuries were reported from the incident.

According to his arrest warrant, Alexis allegedly was armed with a gun at the time of the incident.

Nikita Latoya Mahone, 27, of Birmingham, was arrested on Oct. 15 and was identified as the alleged getaway driver in the armed robbery. She was charged with first-degree robbery, a Class A felony charge, and placed in the Shelby County Jail under a $60,000 bond. Mahone was released from jail after posting bond on Oct. 21.

As of March 4, Alexis was being held in the Shelby County Jail on bonds totaling $60,000. He did not yet have a future court date listed.

First-degree robbery is a Class A felony. If convicted, he could face up to life in prison, according to Alabama law.

CHHS senior Christopher Robinson was named a National Merit Scholarship finalist. He plans to attend the University of Alabama and... read more