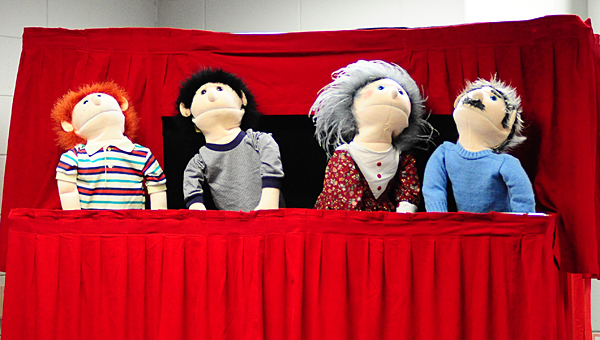 ALABASTER – In contrast to the colorful puppet show used as a medium to connect with elementary school students on a range of serious issues, Owen’s House’s visits to local schools don’t always end on a happy note.

“Unfortunately, we have some kids come forward and report abuse to us after these visits,” Owen’s House counselor Erica Smith said before a presentation to Meadow View Elementary School first-graders on March 4. “Sadly, it happens a lot more than you think it does.”

From March 3-5, Smith and other Owen’s House volunteers set up a puppet show for younger students and a video for older students in the school’s counseling office as they hosted each MVES classroom.

During school visits, Smith said she and the Owen’s House staff seek to educate students on different types of abuse and encourage kids to report abuse to a trusted adult.

“A lot of times, kids don’t know it’s wrong to begin with. This gets it out there and encourages them to report it if it’s happening to them,” Smith said. “We let them know it’s OK to report it. They are not going to get in trouble.”

During a puppet show for several MVES first-graders on March 4, Owen’s House staff members presented fictional scenarios demonstrating physical abuse, bullying and sexual abuse, and showed the kids how to report the abuse to an adult.

During the physical abuse portion of the presentation, Smith explained the difference between punishment and abuse.

“Nobody should ever hit you so hard that it leaves bruises or marks,” Smith said. “That’s different from being punished. That’s called abuse.”

After the puppet show, Smith shared several safety tips for dealing with abuse and bullying: Saying no, getting away and telling an adult.

“Sometimes, they realize ‘This is happening to me,’” Smith said.