COLUMBIANA – A 36-year-old Wilsonville woman is set to appear in Shelby County Circuit Court in late March after she pleaded not guilty to multiple felony charges in connection with an armed robbery at the Alabaster Walmart store. 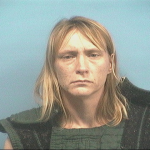 Jennifer Carol Sumrall, who lists an address on Shelby County 25 in Wilsonville, pleaded not guilty to felony charges of first-degree robbery, possession of a controlled substance and second-degree theft of property in late January.

During its January term, a Shelby County grand jury returned a three-count indictment against the suspect, charging her with the three crimes.

The Alabaster Police Department arrested Sumrall on Sept. 2, 2014. The arrest came after Sumrall allegedly attempted to steal “multiple miscellaneous items” valued at about $836 from the store at about 11:15 a.m. on Sept. 2.

When an employee of the store confronted Sumrall, the suspect allegedly “threaten(ed) the imminent use of force against the person … to overcome his or her physical resistance or physical power of resistance” to escape the scene with the items.

During the incident, Sumrall was allegedly armed with a knife, which court documents described as a “deadly weapon or dangerous instrument.”

The possession of a controlled substance charge came after Sumrall allegedly was in possession of carisoprodol, hydrocodone and alprazolam at the time of the alleged robbery.

The Citizens Sheriff’s Academy class has been cancelled for March 5 due to hazardous roadway conditions. (File) FROM STAFF REPORTS... read more