Frios opens its doors in Alabaster 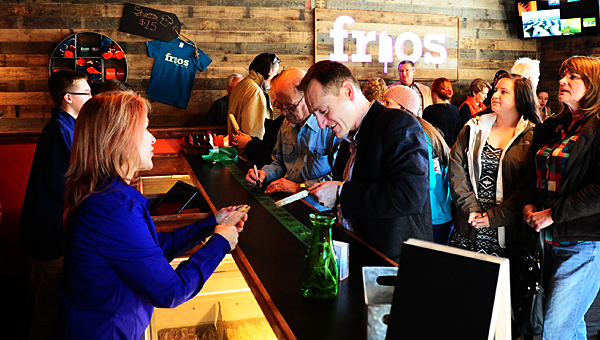 ALABASTER – Temperatures hovering in the mid-40s didn’t stop the summerlike atmosphere at Alabaster’s newest frozen treat retailer as it opened its doors to customers on March 6.

Frios Gourmet Pops opened for the first time on March 6 at 569 First Ave. SW next to Little Caesar’s Pizza in a location formerly occupied by Donut Chef. The store’s first full day of business will be Saturday, March 7.

The company offers a wide range of unique flavors made using produce grown in locations such as Norris Farm in Hokes Bluff, Talley’s Fruit Farm in Crossville and Gypsy Ranch in Altoona. The company also uses products from Weeks Bay Plantation in Fairhope and Wright Dairy in Alexandria.

After a ribbon-cutting ceremony with city officials and representatives from the Greater Shelby County Chamber of Commerce, Alabaster Frios managers Michael and Lori Weidenbach offered those in attendance a taste of the business’ flavored popsicles.

“We are super excited to be here,” Michael Weidenbach said during the ceremony. “We hope you will all come back tomorrow and the day after that.”

Micahel Weidenbach said the Alabaster location has been in the works for more than a year, and said the business has developed a customer base over the past several months by selling popsicles from a mobile cart at local events.

“We have all fallen in love with their pops at the (Alabaster Farmers’) Market on Saturdays and at other community events. We are so excited they have a brick-and-mortar location now,” Alabaster Mayor Marty Handlon said. “We wish them the best, and we want to support them in any way we can.”

DeMasters, Oak Mountain looking to build on past success