PROFILE: Faith, family and a way of life 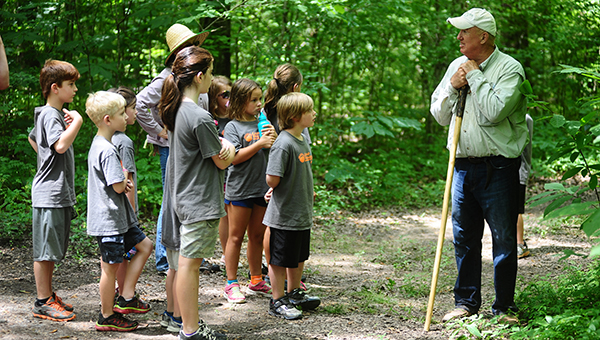 Baker takes a time–out to talk to kids who are on a tour of his farm. Thousands of school children have visited the Old Baker Farm annually since 1988. (File)

HARPERSVILLE–The old saying farming is a way of life might sound cliché, but for Jerry Baker and his family, the 220-acre Old Baker Farm has served as a farm, a way to make a living and most importantly a home.

Baker is 62-years-old and he’s been on the property ever since he was born. His father was born in the big house on the property and he died in 2010 after living to be 101-years-old. Baker is married to his wife Pam and they have three daughters and eleven grandkids and counting who plan on continuing the farms legacy after Jerry and Pam retire.

Old Baker Farm is located in Harpersville, not too far from the hustle and bustle of U.S. 280 but once someone visits the farm, it’s as if time slows down and rushing and worrying about problems becomes an afterthought.

Established in 1899, Old Baker Farm is a family farm with generations of history. 115 years and four generations later, the farm has now evolved into more than a just a traditional farm.

Livestock, crops, cotton, pumpkins, a Christmas tree farm, fall events such as Western Cowboy Day, Cotton Pickin’ Celebration and Living History Day are just a few events that make Old Baker Farm special. One thing that is special to Baker is the chance to interact with school children and show them what farming is about and why it’s important.

It’s a cool, crisp fall morning and Baker is all smiles as a number of elementary schools are visiting for the day to learn about the basics of farming and to see the animals.

Old Baker Farm has been hosting agricultural tours since 1988 when classes first started coming to Old Baker to visit the Christmas tree farm.

When asked about educating the younger generations about the importance of farms and knowing where their food comes from, Jerry thinks it’s imperative that kids are knowledgeable.

“I think it’s very important,” said Baker. “Because if they don’t know we may not take care of the farmers we have left, and if they all disappear then we’re going to be dependent just like we seem to have been on other countries for our food sources and clothing. So it’s a very important part and important that the children know because they’re the generations to come.”

Jerry is seen roaming the property doing everything from feeding the animals to helping carry lunch boxes up to the hayloft in the old barn that was built in 1919 by his Granddaddy.

“Planks were sawed here by a mule-driven saw mill and my Granddaddy and a friend of his built it while my Granddaddy supervised it,” said Baker. “It’s built from heart pine, he gave the people all the planks except the heart pine that he built this out of. In 1943 my Daddy bought the farm from my Granddaddy and he pulled the wood shingles off and put tin on it and really saved it. It’s a unique barn and it has a stairway to the loft. I don’t know of any old barn this old that’s still standing.”

When describing the origins and history of the farm, Jerry’s face lights up as he describes in a slow southern drawl all the hidden secrets and background history that has made Old Baker Farm special.

The farm has a rich history dating back to 1899 when it was established and over the last 115 years technology and times have changed, but the values and beliefs that make up Old Baker Farm have remained the same.

“There’s a lot of living history here,” said Baker. “There’s two creeks that run down through the land here through this farm and there’s 14 springs. This is one of the reasons there were a lot of Indians in this area and the Indians called this place and the surrounding area here ‘The Dipper of the Universe,’ in their native language because there’s so many springs and dipper because they could dip a drink of cold clear water out.”

In addition to being a farmer, Baker is also a pastor at one of the oldest churches in Shelby County at Old Chapel Church.

“I was pastor at Old Chapel Church for 14 years and then they moved me in the Methodist church down below Alex City,” said Baker. “I stayed there for six years and so this is my fourth year back at Old Chapel.”

What immediately draws someone to Jerry and the Old Baker Farm is the friendliness and values that are in the make-up of the Baker family.

“Being close to the land because of my faith really draws me closer to God,” Baker said about what his favorite thing about being a farmer. “That and the fact that I am able to give people something that they don’t have and that they may not ever get to see. Seeing the smiles on their faces and seeing them having fun and enjoying it, knowing that what we did here through prayer and through God has been a blessing.”

Old Baker Farm was one of only 12 farms featured in the USDA 2000 calendar titled “Millennium Celebration of Century Farms.”

Although Baker has enjoyed the success of the farm, he has also put things into perspective and given thanks to the Lord for answered prayers.

“I’m a preacher, I preach the gospel and we hope that what we do here we will be able to testify to people about life in general and the goodness of God,” said Baker. “God’s the one that opened this up for us. We prayed a lot about it, it didn’t just happen, if it hadn’t of been for answers of prayers we wouldn’t be doing this.”