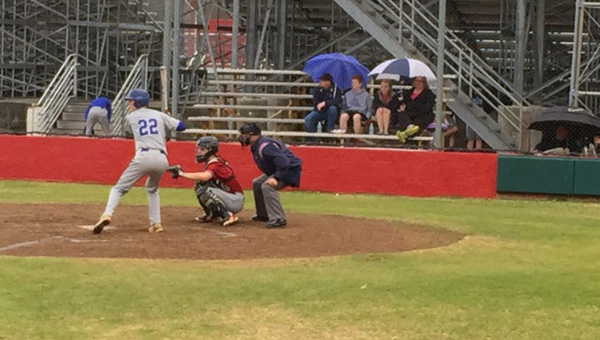 Chaz Cary of Chelsea lines up a Shelby County pitch during their March 9 game. Chelsea lost 4-3 on the road. (Contributed)

COLUMBIANA – The March 9 contest between Chelsea and Shelby County came down to the last inning, and was decided in dramatic, walk-off fashion that saw Shelby County defeat visiting Chelsea 4-3.

Shelby County jumped on the board first with a productive second inning that saw the Wildcats rack up three runs. Tanner Carter lobbed a leadoff double into left field to start the inning, and was brought home later when Zac Scott roped a single to right field. Cody Vennable would later single to bring home two more runs in the inning to help Shelby County build their early lead.

Chelsea was able to get on the scoreboard after Austin Chadwick smacked a leadoff single into left, stole second, advanced to third when Jacob Green flied out to center, and was then brought home on a Joel Cheatwood sacrifice fly.

Both clubs had a flair for the dramatic on this night, as the action ratcheted up a notch in the last inning of play. After opening up the inning with two singles, Chelsea moved two runners across the plate when a Chaz Cary single brought Baylee Horton and Daniel Tierney home to tie the score at 3-3.

Moving into the bottom of the seventh inning, Shelby County needed just one run to close out the contest. Cody Jones led off and reached first base on a mishandled ball by the third baseman Cary. The next batter, Vennable, was hit by an inside pitch and took his base, which advanced Jones to second. Kyle Cofer came up to the plate next and bunted on the first pitch he saw. He placed the bunt well, and everyone reached base safely. Two batters later, Spencer Dill stepped up to the plate and tattooed the first pitch he saw into left field for a walk off single to win the game 4-3.

Dill pitched five innings for the Wildcats in the winning effort before Kelby Jennings and Jones closed out the effort. Trey Coman pitched 3.2 innings for the Hornets and gave up three runs on as many hits before Jake Harkins came in and pitched 2.2 innings of relief effort in the loss.