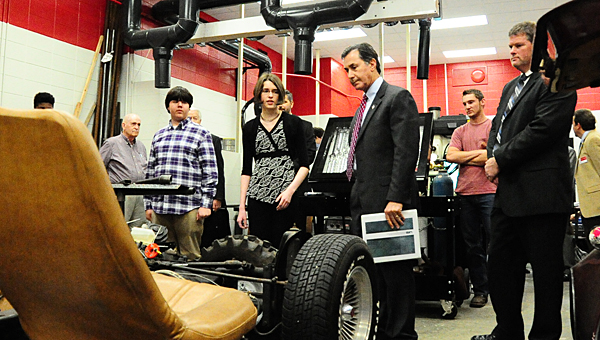 ALABASTER – A United States congressman praised Thompson High School’s engineering academy during a March 12 visit, and said students in the program will have little trouble finding jobs in the future.

“How many of you are planning to pursue careers in engineering in the future?” Congressman Gary Palmer asked about 20 students gathered in the school’s engineering shop, the majority of who raised their hands. “You’ll all have jobs. There is a deficit of workers with the skills you’ll have.

“There will be a huge demand for the skills you are developing here,” added Palmer, who was elected last year to represent Alabama’s 6th Congressional District.

Palmer serves on the congressional Science, Space and Technology Committee, and said he planned the THS tour after hearing positive things about the school’s engineering academy and its instructor, Brian Copes.

Palmer said there will be many opportunities in the future for engineers entering the space travel industry, as the United States currently relies on Russia for travel to and from the International Space Station.

During the visit, engineering students showed Palmer an electric vehicle they are preparing for an upcoming competition, a vintage automobile they are converting to an electric car, a recently unveiled tandem bike system designed to help those with disabilities and a partially completed basic utility vehicle the students are designing to help residents in Honduras.

Copes, who is teaching his first year at THS, praised the Alabaster City School System for “moving heaven and earth” to create the engineering shop before the 2014-2015 school year began.

Copes also touted a partnership THS has formed with UAB to grant some students hands-on training and supervision in the UAB engineering program.

ACS Superintendent Dr. Wayne Vickers said the city’s upcoming high school will include an expanded engineering lab, as well as other specialty areas such as a full medical lab.

Palmer said he is planning to share the THS engineering academy’s projects with his committee.

“I think you guys are going to have great careers ahead of you and have a lot of fun,” Palmer said.