ALABASTER – A 51-year-old Maylene man is facing a felony terrorist threat charge after he allegedly threatened to drive his truck through a mobile home and claimed he was going to attack a pair of Alabaster police officers. 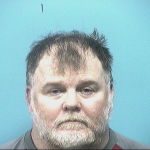 The Alabaster Police Department arrested Darrell Dwayne Allinder, who lists an address on Shelby County 17 in Maylene, on March 11 and charged him with one felony count of making terrorist threats and one misdemeanor count of third-degree domestic violence.

According to his arrest warrants, Allinder’s charges stemmed from a March 11 incident, during which he allegedly “stated that if the victim did not talk to him, he was going to run his truck through the mobile home.”

After police arrived on the scene, Allinder allegedly threatened a pair of officers, claiming he would “beat their (expletive)” while he was allegedly armed with a bowie knife, according to his arrest warrant.

Allinder was released from the Shelby County Jail the day after his arrest after posting bonds totaling $17,000. As of March 12, he did not have a future court date listed in Shelby County Circuit Court.

Making terrorist threats is a Class C felony. If convicted, Allinder could face up to 10 years in prison.

Dalton Merrill and the Pelham Lady Panthers hung on for a 2-1 victory over Pinson Valley on March 9. (Contributed)... read more