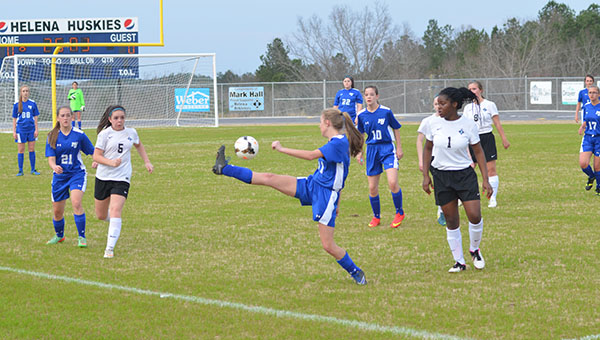 HELENA–The Helena Lady Huskies soccer team took on the Mortimer Jordan Blue Devils and solid defensive play and multiple shots on goal paid off as the Lady Huskies earned a shutout victory over the Blue Devils 2-0.

Both teams are participating in the Metro Soccer Tournament this week and the Lady Huskies earned nine total points after the victory at Helena High School on Wednesday, March 18.

Williams’ first goal came with 22:22 remaining in the first half after scoring on a long bending shot that gave Helena the lead 1-0.

Williams’ scored again with 3:35 remaining in the first half to put Helena up for good as neither team scored in the second half and the Lady Huskies prevailed 2-0.

Helena head coach Cliff Naron credits part of the reason for the victory was due to his team’s constant effort they give all the time.

“Our biggest strength is that if we’re up 1-0 or down 10-0 they play hard the whole game and that’s really what they did here,” said Naron.

The Lady Huskies will now wait to see who they play next in the Metro Tournament. Hoover, Chelsea and Thompson have already earned spots in the semi finals and Helena has a chance to be the fourth team if they get some help from other teams.

“Where we’ve been struggling is capturing the ball in the middle and then moving it down the field so tonight really our whole game was really about the midfield and that’s really who stepped up and made the difference in the game,” said Naron. “They were able to catch the ball here and move the ball down the field and that’s what lead to so many opportunities to score. We’ve also had more shots tonight than we have all season.”

Stephen Poplin led Thompson to a win in the first game of a doubleheader with Auburn on March 17. The... read more