3,500 pounds of trash cleared from Buck Creek and Cahaba River 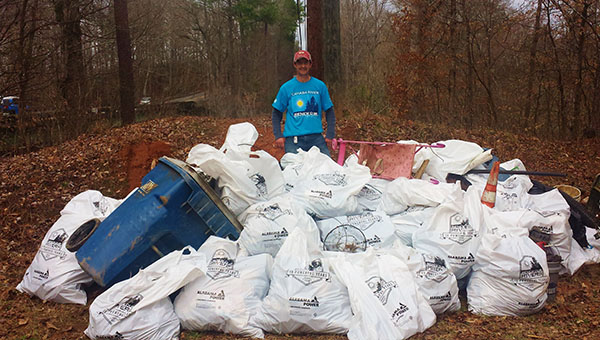 Event Organizer David Butler stands behind just a portion of the trash that was collected from Buck Creek on Saturday, March 14. (Contributed)

HELENA–Close to 120 volunteers came out on Saturday, March 14, for the Renew our Rivers Cahaba Clean-Up and demonstrated that having some personal responsibility goes a long way in helping keep the community and environment clean.

Volunteers arrived early Saturday morning at the Helena amphitheater, where they divided into groups and helped pick up trash along Buck Creek by foot and by boat.

Event organizer David Butler said there was a noticeable difference from Friday to Saturday after the clean up effort.

“From an impact standpoint, you could tell a dramatic difference from Friday to Saturday along Buck Creek,” said Butler. “We removed some Styrofoam and other little debris around the park. Some stuff had been there a long time, and we cleaned up things such as intertubes and rafts that had gotten stuck in trees and then left along the bank. It makes an impact on how the river looks, and it was nice to get all of that before it got lost in river somewhere.”

More volunteers came out to the clean-up effort this year, and the increased number helped boost the amount of trash collected.

Last year 1,120 pounds of trash were collected compared to the 3,500 pounds this year.

Of the 3,500 pounds of trash, not all of it is taken to the landfill. A majority of it is salvaged and then recycled.

After the successful clean-up, there are now plans for another clean up to take place this summer when the river is lower and more debris can be captured.

“We are constantly taking from the river with things such as drinking water, and it’s nice to see people giving back,” said Butler.

Those interested in more information on the Cahaba Riverkeeper can visit Cahabariverkeeper.org.25n