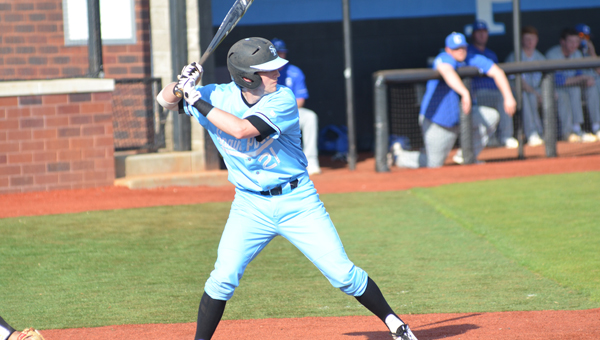 HOOVER – The class 7A no. 2 Warriors of Thompson did not have an answer for the seventh-ranked Spain Park bats on March 19, giving up 31 runs over the span of two games and dropping both contests in the doubleheader. The Jaguars, winners of nine-straight, advanced to 13-6 while Thompson fell to 13-5 after the two contests.

Mason Duke took the mound for the Jaguars and faced off against John Curtis Goolsby of Thompson. Goolsby had a tough day as he only lasted two innings and gave up 10 runs on eight hits before being replaced by Matthew Blaes who finished the game for the Warriors. Duke, the Spain Park ace, did not fare particularly well himself, as he gave up 10 hits and five runs through four innings. His pitching performance combined with the relief effort of Adam Schultz would prove to be enough because the Spain Park bats connected early and often.

The Jaguars scored 13 of their 15 runs in the second and third innings, where they scored six and seven runs, respectively to widen the gap on the scoreboard to a comfortable margin. Tyler Wise had a particularly impressive game from the plate, as he went 4-5 from the plate with a double. Hayden Freeman went 2-4 from the plate and drove in four runs in the winning effort.

The hitting trend continued for the home team in the second game of the doubleheader, as Thompson pitchers Tanner Terry and Hunter Goggans could do nothing to stop the offensive prowess of the Jaguars on this day. Spain Park had a more balanced approach to their scoring in the second game, scoring in every inning except one, and never scoring over five runs in any one inning. Tristan Lamb and Jake Whitehead combined to throw six innings for Spain Park, and the Warriors were able to score six runs, but it was not close enough to match the offensive firepower of the Jaguars on this day.

Wise again had four hits in the game, this time on only four tries, to bring his total for the two games to 9-10 from the plate, bringing his batting average to a ridiculous .900 for the series. Riley Reach and Stephan Poplin both went 2-4 for the plate for Thompson in the losing effort.

Stephen Poplin led Thompson to a win in the first game of a doubleheader with Auburn on March 17. The... read more