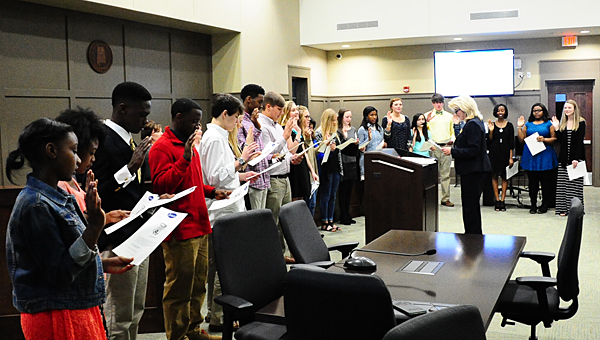 ALABASTER – Alabaster’s March 23 City Council meeting was packed to the brim with visitors, but most of them weren’t there to see the city’s adult governing body.

Rather, the majority of the crowd attended the meeting to see the second – and largest – group of youth leaders the city has seated through its Teen Council program.

Alabaster Mayor Marty Handlon recognized and swore in 26 members of the 2015 Teen Council during the meeting, marking the second such group appointed to the group.

“We are excited about this group. We learned some things from last year’s group,” Handlon said. “With all of the extracurricular activities they all have going on, it’s sometimes hard for them to all get together and plan things.

“With more of them, we feel they will be able to continue to do things even if some of them can’t be there,” Handlon added. “We are really thrilled and look forward to a great year.”

The following teens were sworn in during the March 23 City Council meeting:

Handlon chose the Teen Council members from among dozens of applicants over the past few weeks.

“That is a big honor,” Ward 1 Councilwoman Sophie Martin said. “I know we are excited about the progress you’re going to make.”

By NEAL WAGNER / Managing Editor COLUMBIANA – A 21-year-old Birmingham man will spend the next five years on probation... read more