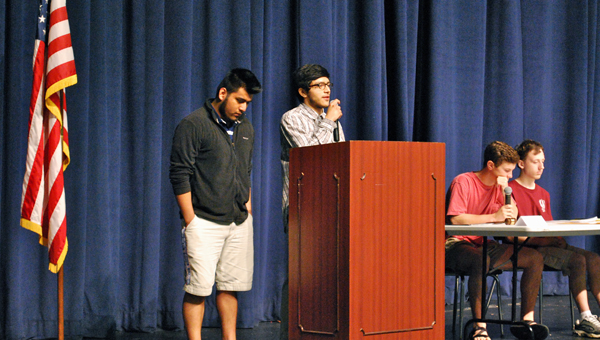 From March 23-25, the seniors discussed bills on current issues ranging from prevention of distracted driving and depopulating prisons to banning animal testing and abolishing the daylight savings time change.

“They get really into it, we get to see the fun side of them,” Schwartz said.

The mock congressional session was the culmination of a larger “project-based learning” assignment in which students acted as state representatives to Congress, Schwartz explained.

Students from Schwartz and Bahr’s classes were paired together to chose a topic, research it and compose a bill.

“They run the entire thing themselves,” Bahr said, noting students were given the opportunity to research something they were passionate about and work collaboratively across classes through Google documents.

Seniors Laura Kappen and Francie Harris chose to focus on prekindergarten education. They were inspired by a class discussion about President Barack Obama’s State of the Union address.

Harris explained she and Kappen drafted a bill to create “high quality preschools” for all children.

“We found that your brain starts developing at a very young age,” Kappen said, noting creating a strong educational foundation for children is important. “These are children that are going to be taking care of us in the future.”

After drafting their bills, students were divided into Congressional committees and debated bills in class. Of the more than 100 bills drafted, only 31 moved passed the committees.

“Even though I get angry, I try not to be disrespectful, because that’s what people believe,” Kappen said, explaining the project helped her listen to and appreciate the opinions of others.

The project provided the seniors a window into the workings of Congress and the United States government.

“So few bills pass through Congress, and they get to see why,” Bahr added.

“It’s completely following in line with how it works in Washington,” Schwartz said. “We’re sending out informed citizens.”