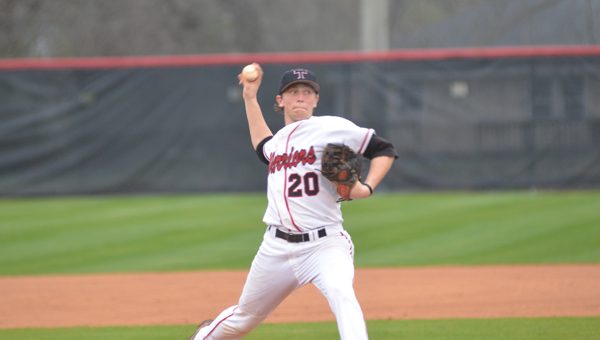 Colin Lille, shown here in earlier in the year pitching against Cullman, pitched 5.1 innings in Thompson’s March 24 matchup with Hoover and led the Warriors to an 11-4 win. (Reporter Photo / Baker Ellis)

HOOVER – The Thompson baseball Warriors had lost three games in a row from March 19-21, including back-to-back losses to Spain Park on March 19 by a total of 31 runs to 12. After dropping the first of two games on March 21 to Cullman via a 1-0 decision, the Warriors won their first game in four tries with a 6-0 win against Southside of Gadsden to right the ship.

1-3 in their last four games, the Warriors of Thompson needed a strong showing in a March 24 showdown with class 7A No. 5 Hoover to help them shake off their midseason slump. The bats responded in a big way for Thompson against Hoover, as they scored at least one run in every inning except for one on their way to an 11-4 shellacking of the Bucs.

Colin Lillie started the game for Thompson and pitched 5.1 innings, threw 108 pitches and gave up three hits and two earned runs. John Curtis Goolsby came on in a relief effort and finished the last 1.2 innings in scoreless fashion. Hoover by comparison used five pitchers in the game, with no pitcher staying on the mound for more than two innings.

With the score tipped slightly in Thompson’s favor in the top of the second inning at 2-1, the Warriors plated four runs to stretch their lead to a five-run 6-1 advantage that they only added to throughout the rest of the afternoon. Stephan Poplin hit the only extra-base hit of the day for Thompson in the second inning, which brought home Layton Waldrop and Heath Haskins to help add to their lead.

Lance Johnson and Poplin both went 3-5 from the plate on the day, with Poplin registering a team-high five RBIs. Chris Lewis and Jonathan Crawford both tallied two hits on the day, with Lewis going a perfect 2-2 from the plate. Zach Brammer, Adam Durrett and Haskins each added a hit as well to bring the Warriors hit total to 13.

With the win, Thompson advanced to 15-6 on the year. The Warriors are currently ranked second in the state in class 7A.