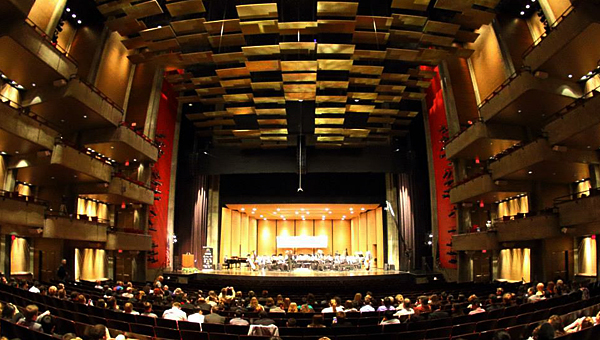 The Thompson High School wind ensemble will perform its National Concert Band Festival concert during a pair of benefit events at THS on April 14. (Contributed/Eric Starling)

ALABASTER – After being diagnosed with leukemia shortly before the Thompson High School band left for a prestigious music festival in Indianapolis, band member Hallie Hartman was forced to cancel her plans to travel with the group.

So on April 14, the band will bring its Indianapolis concert to Alabaster in Hartman’s honor.

“We are basically going to do the same program we did in Indianapolis since she was unable to travel with us,” THS Director of Bands Jon Bubbett said during a March 25 interview, referencing the band’s recent trip to the National Concert Band Festival from March 12-14.

For the past few weeks, Hartman has been undergoing chemotherapy treatments at Children’s of Alabama in Birmingham, and is expected to remain in the hospital for about three more weeks, Bubbett said.

After coming home for several days, Hartman will then undergo 10 more days of chemotherapy.

When Bubbett and the THS band members learned of Hartman’s diagnosis, they quickly began thinking of ways to help her and her family get through the difficult situation.

Shortly after returning from Indianapolis, Bubbett, the band members and parents started planning a benefit concert in Hartman’s honor.

The THS wind ensemble is planning to host two benefit concerts on April 14: One for students and another for the public. The student concert will be held in the school’s gym at 9:30 a.m., and the band will request a $3 donation per student.

The public concert will begin at 7 p.m. in the THS auditorium, and will come with a $5 suggested donation per person.

“All the donations will help to meet any medical costs Hallie and her family may incur,” Bubbett said. “So far, everything has gone really well with this. The key is just going to be getting the word out.”