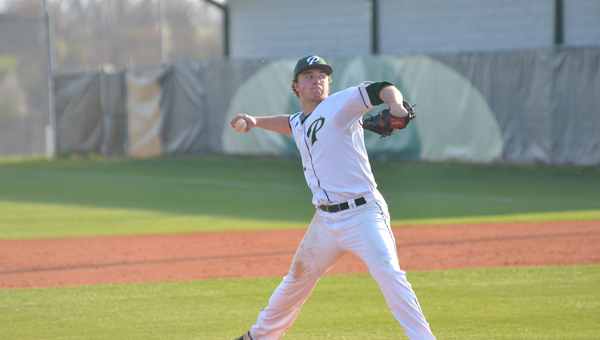 Sam Finnerty and the Pelham Panthers beat Hueytown in successive days from March 24-25. Finnerty pitched a complete-game shutout in the first outing and went 3-4 from the plate in the second. (Reporter Photo / Baker Ellis)

Over the course of two days from March 24-25, the Pelham baseball Panthers played the Golden Gophers of Hueytown twice in successive days. The first game, on March 24, was played at Pelham while the second was played at Hueytown. The Panthers won them both by a combined score of 24-4.

Sam Finnerty pitched a four-hit complete game in the winning effort on March 23. Finnerty threw 89 pitches in seven innings and struck out 11 on the day, almost half of the 26 batters he faced.

Even with Finnerty pitching like a man possessed, the game remained close until the bottom of the fifth when, with Pelham holding on to a slim 1-0 lead, Hunter Stovall rocketed a triple into the outfield, which scored Chase Martin and Tyler White and gave the Panthers some breathing room and allowed them to coast to a 4-0 win.

Less than 24 hours later the Panthers traveled to Hueytown to play their second game in as many days against the Golden Gophers. The second contest did not start out especially well for Pelham, as Hueytown jumped out to a 3-1 lead after the first inning. After the first inning Connor Radcliff settled in and only gave up one more run the rest of the way. Radcliff pitched a complete game, five-inning effort and struck out four on the day.

Radcliff would get significant support in every inning following the first. The Pelham bats erupted for 17 runs over the next four innings and held Hueytown to a lone run in the same span, which was enough to call the game after the fifth inning due to the run differential.

“Our offense really stepped up tonight,” Anderson said. “We had 18 hits and 18 runs and 15 were RBIs, that’s hitting the ball.”

Finnerty led all batters in the second game with three hits while Stovall brought in four runs in two at-bats on the day.

Pelham advanced to 14-6 with the two wins.