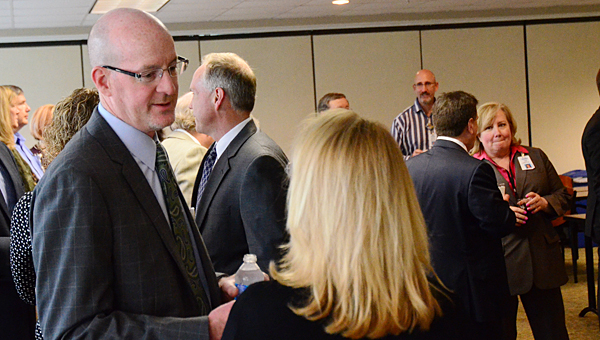 “These next two hours are the two hours I’m going to dread the most in the nine years I’ve worked here,” Wilson said shortly after arriving to a reception in his honor. “It’s hard to leave those relationships you’ve built over the last nine years.”

March 26 marked the final day of Wilson’s tenure at Shelby Baptist after he announced his resignation from the SBMC post in late February.

Wilson has accepted the president position at the North Mississippi Medical Center in Tupelo, Miss.

During the reception, the large conference room in the hospital’s Physicians’ Center was packed with friends Wilson has made while serving as the Shelby Baptist leader.

Organizations such as the Alabaster-Pelham Rotary Club, which meets in the hospital each week, presented Wilson with plaques, while hospital staff displayed a slideshow of Wilson’s time at the hospital.

“He’s just been a great person to work for,” said Donna Smelcer, Wilson’s executive assistant. “We share the same family values, and we’ve had a great working relationship. It’s hard to see him go.”

During his near-decade of service to SBMC, Wilson said he is most proud of working alongside hospital staff to improve quality measures at the facility. For the past two years, the Leapfrog hospital rating agency has rated Shelby Baptist with an “A,” and the Joint Commission has recognized the medical center as a “Top performer.”

“We have worked together to make the hospital’s overall quality better,” Wilson said.

In addition to helping the hospital earn national recognition, Wilson has also earned the respect of his employees, they said.

“He’s the most gentle, compassionate person you could work for,” said hospital Human Resources Director Cindy Nicholson. “The people he is going to are going to be pleasantly surprised by the culture of camaraderie he creates.”