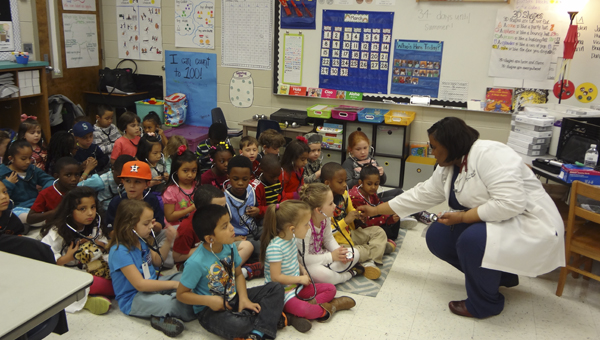 CALERA – As UAB emergency room physician Marquita Hicks showed a group of Calera Elementary School students how to use a stethoscope the morning of March 27, several children made sure she knew they heard their heartbeats.

“I hear my heart!” one student said, followed by another replying with, “I hear mine, too!”

Hicks was one of nearly a dozen presenters who talked to CES students during the school’s annual Career Day, the culmination of students’ month-long study of different careers.

“We do Career Awareness Month,” CES counselor Carrie Cashion said. “I get them started on a list of basic careers.

Students in kindergarten through second grade dressed up to mirror the career they were interested in, and listened to presenters including a golf professional, veterinarian, pharmacist, doctor, nurse, artist, farmer, pest control representative and fire and law enforcement officers.

McDonald’s partnered with CES this year to turn the school’s front office into a “drive-thru,” complete with posters and marketing materials, and provided CES teachers with red McDonald’s shirts and name badges to wear.

Each student went through the drive-thru and received a McDonald’s Happy Meal bag with toy, coloring sheet and stickers, and school staff members were given McDonald’s hamburgers for lunch.

Ronald McDonald surprised the students with a visit the afternoon of March 27.

To show their appreciation, CES students and staff donated pop-tops and money to Ronald McDonald House Charities, which assists families with sick children with housing and medical expenses.

“Career Awareness Day is one of the many ways Calera Elementary supports the Alabama Career Ready Initiative for elementary students,” CES Principal Dr. Susan Cole wrote in a press release.

Second grader Landon Morrow dressed up as a policeman for the third year in a row.

“I like to go to dangerous stuff and protect people,” Morrow said.

Second grader Camdyn Martin wore a red dress and said she hoped to become the president of the United States.

Martin has honed her leadership skills as an Eagle Ambassador at CES.

“I’ve been trying to work hard and trying to achieve that I can make a great leader someday,” Martin said.