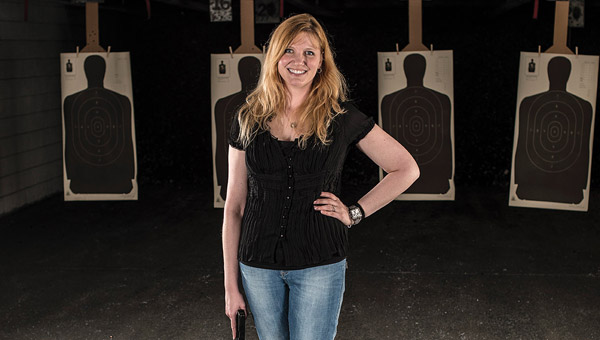 On top of her full-time job as mother of three, Chelsea’s Beth Alcazar is also a firearms instructor and voice for women in the world of firearms. (Contributed)

CHELSEA—Beth Alcazar is quick to describe herself as “an everyday mom.” But this busy mother of three is also a trained and certified firearms instructor, self-defense teacher and voice for women in the world of firearms.

In addition to leading self-defense classes and sessions at the firing range, Alcazar is a featured writer for Concealed Carry Magazine and runs a blog, “Pacifiers and Peacemakers.”

Her involvement in the world of firearms began almost by accident when she took a job writing and editing for hunting magazines in 2000.

“I didn’t grow up in a home with firearms,” Alcazar said. “It just happened to be the industry I fell into, and I loved it.”

“It’s six miles from my home, that was my daughter’s school,” Alcazar said, recalling the panic and terror she felt during the experience. After that event, Alcazar said she and her husband decided “We were going to be a little more proactive from here on out in our house.”

For Alcazar, firearms provide “one extra layer of protection” and one more tool for her to protect her family.

“I just want to be a prepared mom,” Alcazar said. “It could make the difference between life or death for someone in my family.”

However, Alcazar firmly believes along with a firearm comes responsibility, education and staunch safety practices. As with any other dangerous household item, such as an oven or electrical outlets, children need to be taught safety rules.

“We believe it’s all about education, not isolation,” Alcazar said, adding her children are taught to treat every gun as if it is real and loaded, meaning “hands off (and) tell an adult.”

Through her blog and self-defense classes, Alcazar also hopes to inspire other women to be proactive and learn to protect themselves.

“I really, truly believe this is something every woman in the nation should understand and embrace,” Alcazar said.

Alcazar is constantly receiving more training and expand her blog in order to give women the tools and information they need.

“My goal is just to continue to grow what’s been started,” Alcazar said. “But I’m still an everyday mom, mom will always be the number one job.”