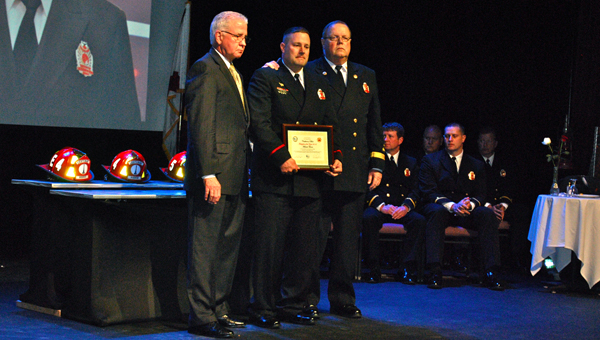 Eleven members of the department, with a combined 320 years of service, were recognized for their retirement.

“These men understood their mission and have done a fantastic job with their work, command and their leadership,” Hoover Fire Department Chief John Wingate said.

The Firefighter and Paramedic of the year were commended during the ceremony.

Decorated military veteran and described as a “go-getter” by Hoover Fire Department Executive Officer Rusty Lowe, Thorin was named the Firefighter of the Year 2014. Thorin retired from the department for medical reasons related to his military service during the Gulf War.

Fire/medic/registered nurse Wanda Morgan was honored as Paramedic of the Year 2014. She was commended for her work to become a registered nurse and efforts during the 2014 snow storm when she created “a makeshift clinic to serve patients who could not be safely transported to hospitals,” Lowe explained.

Retired Lieutenant Carl Foster was also commemorated. Foster retired from the Hoover Fire Department after 20 years of service, and “passed away in 2013 as a direct result of (an) injury suffered on the job,” Lowe said.

Before closing the ceremony, the Hoover Fire Department and the city of Hoover presented two checks, totaling $30,000, to Camp Conquest, a camp that serves pediatric burn survivors.