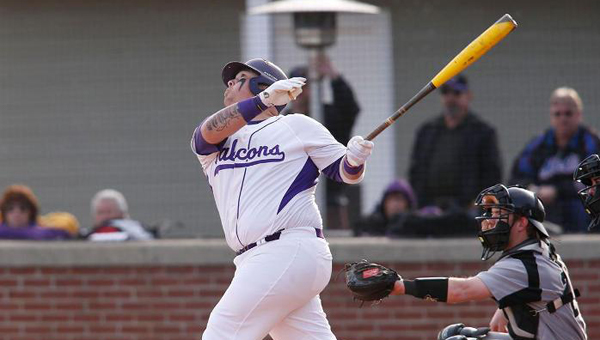 University of Montevallo’s Steven Knudson homered for the 17th time this season on March 31 against Trevecca Nazarene University. (Contributed)

NASHVILLE, Tenn. – University of Montevallo junior Steven Knudson homered for the 17th time this season in the Falcons’ 12-4 win on the road at Trevecca Nazarene University in a non-conference game on March 31.

Knudson, who is second nationally in NCAA Division II with 17 home runs, is only eight homers away from tying the school record of 25 home runs set by Chris Walker during the 1988 season after blasting his seventh bomb in 10 games. He finished 1-for-3 at the plate in the victory.

Senior Matthew Haskins led the Falcons (16-15) offensively in the victory as he finished 3-for-5 at the plate. Haskins drove in two runs and scored one run.

Freshman Drew Mullinax (2-2) earned the win on the mound in his third start this season after giving up four unearned runs on five hits with six strikeouts and no walks in seven innings, the longest outing of his short career with the Falcons.

The Falcons got on the scoreboard early with two runs in the top of the first inning, with Knudson and Hutcheon scoring on a two-run double by Hyde to give Montevallo a 2-0 lead.

After the Trojans plated four runs in the bottom of the second to take a 4-2 lead, the Falcons answered with 10 consecutive runs the rest of the way. Knudson’s solo homer in the top of the fourth inning pushed the Falcons’ lead to 6-4.

The Falcons extended their lead to 12-4 with four runs in the top of the eighth inning. Junior Jeremy Hyde scored the first run in the frame on an error by the Trojans. Michael Simmons plated Collin Dupree with an RBI single and Dupree scored on another error before Simmons came around to score on a RBI single by Haskins.

The University of Montevallo baseball Falcons combined to score 25 runs in two games against Miles College on March 24.... read more