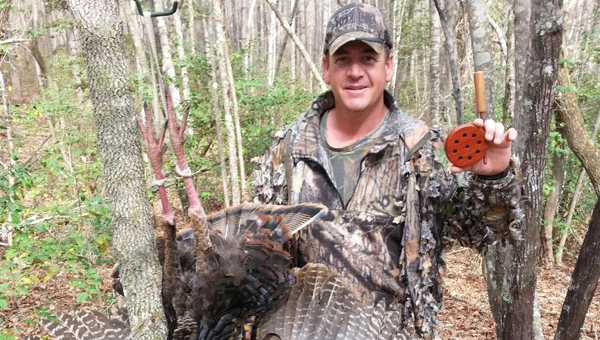 Brent Popwell, pictured here with one of his self-made callers and the rewards of a successful hunt, makes his own turkey calls to help him hunt. (Contributed)

Brent Popwell is what you could call an outdoor enthusiast. Since he was a child he has had an interest in turkey hunting. In fact, his first encounter with a gobbler occurred when he was just ten years old, armed only with a BB gun. However, in the last ten years that interest has metamorphosed into a passion. So much in fact, Popwell began designing his own turkey callers for himself and hunting club acquaintances.

“I just have a passion for it. I get satisfaction of making something myself and using it in the woods” said Popwell.

Popwell is not just limited to a specific type of caller either. In fact, he is quite adroit at the art of clucking, purring and cackling. “The first I ever made was a box caller. It was a smaller popper box,” Powell said. “You can yelp, cluck and heckle with it. I killed four turkeys one spring with that caller and called in three others for friends.”

The different callers that Popwell makes are box callers and pot calls. The latter comes with the option of being either crystal or slate.

For those who are new to the sport of turkey hunting, Popwell offered some enlightening advice on the subject. “The number one tip is to be patient,” he said. “Some people think it’s fast-paced, but patience will kill you more turkeys than anything. You have to outwit them.”

Of all of Popwell’s forays into the wilderness, one hunt stands out amongst them all. “Me and my dad killed a turkey together about 7-8 years ago in Sumter County,” he said. “It was the only turkey I ever killed without a spur. It weighed 22 pounds and had an 11-inch beard.”

Not to be out done, but Popwell would ironically sell a caller to an older gentlemen acquaintance from one of his hunting clubs who killed an eastern wild turkey with a 21 ¼ inch-long beard. That is currently the largest in the state of Alabama and second all-time in the U.S.