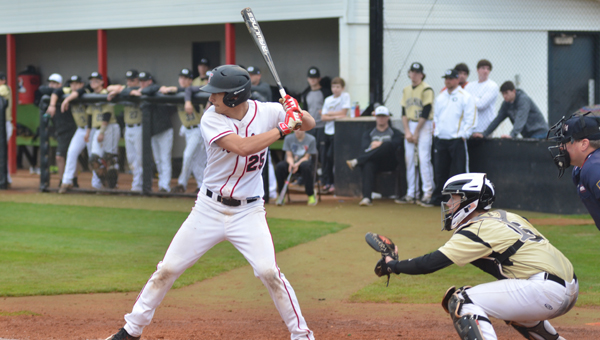 Stephan Poplin and the Thompson Warriors fell to Cullman in the semifinals of the Beef O’Brady’s Classic on April 2 at Hoover. (File)

HOOVER – Thursday, April 2 was an entertaining day for Thompson baseball. The Warriors beat Enterprise in nine innings in the quarterfinals of Hoover’s Beef O’Brady’s Classic before falling to Cullman 1-0 in the semifinals.

The Warriors came dangerously close to blowing their quarterfinal matchup with Enterprise before righting the ship and squeaking out the win. Hunter Goggans started on the mound and pitched four innings before Tanner Terry came in for relief and threw the last five. The two combined to throw 150 pitches and only combined for one strikeout over the entire nine innings.

Up 5-2 entering the sixth inning, the Enterprise bats woke up and scored four runs to give them the slim lead. Thompson responded in their half of the innings by plating a single run, enough to tie the game at 6-6. Neither team could break the deadlock in the seventh, and the game went to extra innings.

The 6-6 deadlock stood until the bottom of the ninth inning. Stephan Poplin drew a one-out walk and Adam Durrett smacked a ball to left field to place runners on first and second. Chris Lewis stepped up to the plate and on the eighth pitch of the at-bat, with two strikes against him, he sailed a walk-off double into left field, which scored the winning run and sent the Warriors into the semis.

Just a few hours after one of the most entertaining and satisfying wins of Thompson’s season, the 7A No. 6 Warriors faced off against the 6A No. 1 Cullman Bearcats for the second time in the tournament and fifth time this season. Cullman won the previous game of the week, and the two schools were 2-2 on the year before the semifinal outing.

JC Parker’s complete game gem was for naught, as the Warriors could not plate a run at any point in the contest and only scrounged together four hits. Parker threw 85 pitches over seven innings and only allowed five hits and one run, but the lone run was enough for Cullman to advance past Thompson on the day.

Thompson’s record moved to 21-9 after the tournament.

Thompson’s Mariah Poe battles for a ball against a Vestavia defender in their March 27 matchup. The Lady Warriors came... read more