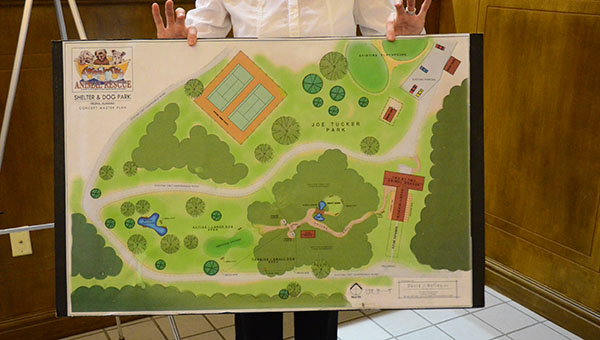 Sonya King of Two by Two Animal Rescue in Helena holds up a a proposal that would place a new dog park and animal shelter at Joe Tucker Park. (Reporter Photo/Graham Brooks)

HELENA–Helena City Council members unanimously agree that the city of Helena would make a great location for a dog park, and on Monday, April 6, at a pre-council work session, members from Two by Two Animal Rescue were on-hand to present a proposed plan for a new dog park and animal shelter in Helena’s Joe Tucker Park.

Two by Two Executive Director Sonya King presented a map with a layout of the proposed park and climate controlled animal shelter to the council.

Monday was the first time the council saw the initial proposal, which includes a climate-controlled animal shelter, a nature park trail, a memory garden to remember pets and access to go from Joe Tucker Park to the dog park.

“We really believe it’ll be a park that just draws people in,” said King. “Regardless if you’re an animal lover or not. We plan to create it where it’s very serene and a very inviting place for people to come.”

Although the Helena City Council members are in agreement on bringing a dog park to Helena, Councilman Mike Jones expressed concerns about the possibility of noise complaints from the animal shelter.

“I’m all for the dog park,” said Jones. “I’m not sure I agree with the kennel and the rescue being involved in the middle of the park. That’s just my personal opinion.”

The dog shelter would include two areas. One where dogs can run together and another where dogs that need to be isolated be will kept away from the general population.

Nothing was voted on or approved about the dog park on Monday, but the dog park proposal will be on the next Helena City Council meeting agenda on April 20 for public comment.

Two by Two Rescue is a non-profit and no-kill organization, and King wants people to adopt Helena animals from Helena in the future.

“This will allow a nice place for people to come into Helena to look at the dogs,” said King. “Instead now we’re taking our animals out of Helena and into Hoover telling people to look at Helena animals to adopt. This would provide a place.”

More information on Two by Two Rescue can be found at Twobytworescue.com.