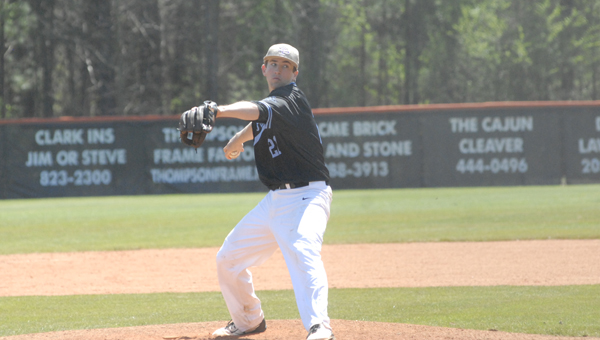 Mason Duke threw 120 pitches over seven innings and struck out 15 on April 7 against the class 7A No. 2 ranked Vestavia Hills Rebels. Duke and the fourth-ranked Jaguars escaped with a 2-1 win. (File)

VESTAVIA HILLS – Mason Duke pitched one of the best statistical games of the season on April 7 en route to the class 7A fourth-ranked Jaguars picking up a hard-earned 2-1 win over class 7A No. 2 Vestavia Hills. Duke threw 120 pitches over the course of 7 innings, gave up four hits and one run and struck out 15. Duke only faced 27 batters all day, which means that for every nine batters Duke saw, he struck out five of them, which is an exceptionally high strikeout rate.

While Duke brought his A-game, the Rebel pitching staff did their best to limit the Jaguar bats as well. Carter Jacobs, Jonathan Stockton and Brett Jones combined to limit the Spain Park offense significantly.

The difference in the game came over a two-inning span from the fourth inning to the fifth, when the Jaguars managed to knock home two runs in the offensive-sparse contest. Collin Walker drew a one-out walk in the top of the fourth and advanced to third when Jacob Rich connected for a single to right field. Tyler Wise came up to the plate next and hit into a fielder’s choice, which was good enough to score Walker to take a 1-0 lead.

Two errors by JD Gann, the Vestavia third baseman, in the top of the fifth inning were enough to lead to the second Spain Park run, which would prove to be enough with Duke on the mound. The Rebels added their sole run in the bottom of the sixth inning, but Duke and the Jaguars held on for the 2-1 road win.

Bryan Sanderson led the way for Spain Park from the plate on the day. Sanderson went 2-for-3 on the day and was walked once in the win. Wise, Rodney Anderson, Hayden Freeman and Rich also registered hits on the day.

With the win, the Jaguars advanced to 18-10 and picked up a critical victory over a highly touted class 7A foe. The Jaguars last regular season game is on April 16, and the 7A state playoffs begin on April 24.

By BAKER ELLIS / Sports Editor TUSCALOOSA – At a tournament on April 4 at the University of Alabama, class... read more