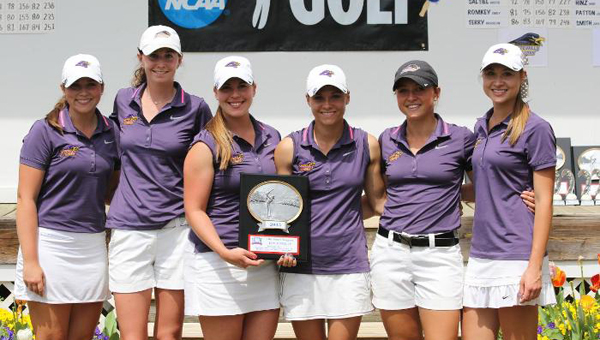 CARROLLTON, Ga. – For the second time in four tournament appearances with the University of Montevallo golf team, Arin Eddy won the individual championship at the University of West Georgia Invitational on Tuesday, April 7.

Eddy finished with an even-par 216, carding an even-par 72 in the first round, a one-under par 71 in the second round, and a one-over par 73 in the third and final round.

Eddy has now placed in the top 10 in all four of the tournaments she’s competed in for UM and is the stroke leader in the Peach Belt Conference.

Lander, though, won the overall team championship with a three-round total of 900, 36-over par.

Montevallo finished in second place with a 42-over par 906, which was 12 strokes ahead of the third place finisher.

Kirstie Saltiel finished ninth in the field and second for the Falcons. She carded an even-par 72 in the first round, followed by a five-over par 77 and a six-over par 78 for an 11-over par 227.

Elaine Wood had her fifth top 10 performance of the season, finishing 10th with a 12-over par 228. The sophomore shot a one-over par 73 in the first round, a five-over par 77 in the second round, and a six-over par 78 in the final round.

Wood has the second-best stroke average in the PBC, trailing only Eddy.

The Falcons will be back in action next weekend at the Peach Belt Conference Championship in Greenwood, S.C. That tournament will run over three days and will start on April 17.