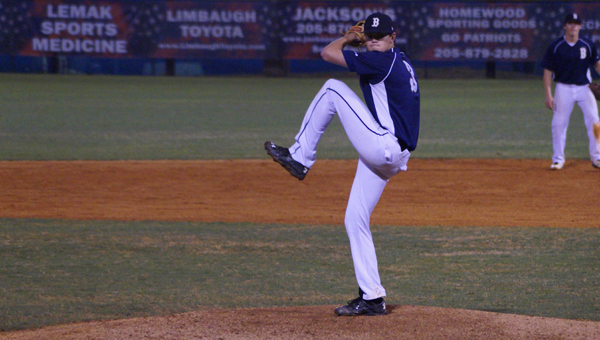 Briarwood starting pitcher Trey Mitchell allowed only one Patriot batter to reach base between the second and fifth inning during the Lions’ 6-5 win on April 7. (Contributed / Sam Chandler)

Although the Lions jumped out to an early 5-0 lead in the top of the third inning, the Patriots displayed their resiliency, mustering a late-inning rally that nearly led to a comeback victory.

Anchored by an effective pitching performance from Trey Mitchell, the Lions limited the Patriots to two hits through the first five innings. After narrowly escaping from an error-ridden first inning, Mitchell and his defense settled down through the next four.

“The team had energy and they were backing me up,” Mitchell said.

As a result of the Lions’ rugged defense, highlighted by centerfielder Jake Morris’ web-gem worthy catch in the bottom of the fourth, along with Mitchell’s sharp pitching, only one Patriot batter reached base between the second and fifth inning.

“I found my groove,” Mitchell said. “The two-seam fastball was working real good and then I could mix in the curveball.”

While the Lions’ defense buckled down through the mid-innings, the offense roared to life, exploding for five runs in the top of the third.

After four Patriot runs in the bottom of the sixth inning cut the Lions’ lead to 5-4, right fielder Carson Eddy tacked on an insurance run in the seventh, singling to right field before advancing all the way home on back-to-back throwing errors.

The extra run proved to be the difference, as Homewood plated their fifth and final run of the night in the bottom of the seventh.

Mitchell earned the win on the mound for Briarwood, recording five strikeouts over five and one-third innings. Sam Strickland pitched the final inning and two-thirds to secure the save.

Austin Chadwick and the Chelsea baseball Hornets advanced to the finals of the Lake Martin Baseball Classic, which took place... read more