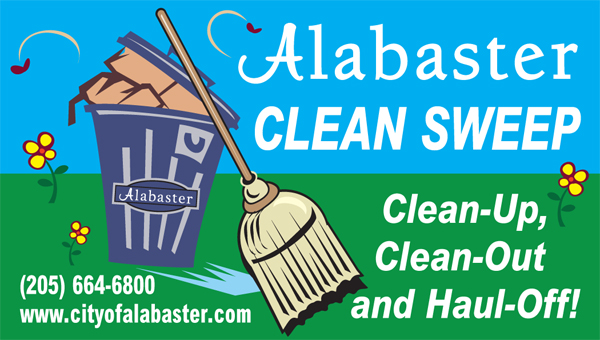 Alabaster will offer residents chances to keep the city beautiful during the Clean Sweep program throughout April. (Contributed)

ALABASTER – During the month of April, the citizens of Alabaster are working to spruce up the city during the third annual Alabaster Clean Sweep.

The program involves different groups of activities to keep Alabaster clean, including groups of volunteers who pick up trash every Saturday morning in April with about 100 Alabaster residents helping out in total.

“We recruit people from all over the city to pick up litter,” said Stacy Rakestraw, Alabaster city council member and organizer of the event.

The volunteers range in age from Boy Scout and Girl Scout troops, to a group of 10 ladies from First Baptist Church of Alabaster who are picking up their Adopt-A-Mile during April.

For the kids, the initiative offers a lesson in public service, Rakestraw said.

“It gives them an opportunity to be involved in the city and volunteer and help keep our city beautiful,” Rakestraw said.

A group of 40 students in the Leo Club will be cleaning Buck Creek, to remove all of the waste and things that have washed into the area.

“The kids are going to go through and get all the junk out,” said Rakestraw.

In addition, the city offers a number of services to help residents who are doing spring cleaning in their own homes.

On April 18, the city will offer secure electronic disposal and paper shredding at the Thompson sixth grad center, which is located on 119 South near Thompson Road. In addition, there will be extra dumpsters on site for other items can be disposed.

“It’s an initiative to help people clean up their house,” Rakestraw said.

The Alabaster Clean Sweep initiative is in its third year, with something new every year.

“It has been great,” said Rakestraw. “Everyone looks forward to it.”

Chelsea High School and Project SEARCH students worked together to present the annual Dressed to Impress Fashion Show at the... read more