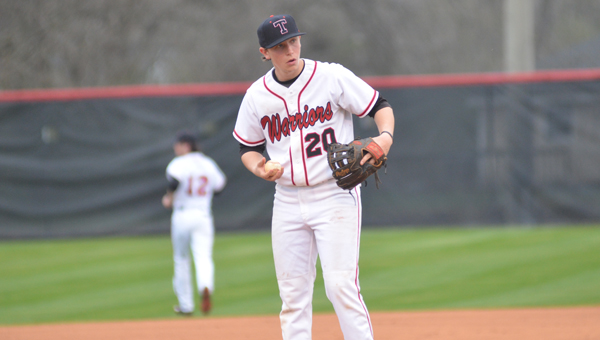 Colin Lillie gathers himself to throw in an early season matchup. Lillie pitched a complete game shutout on April 7 against Tuscaloosa County to givethe Warriors their 22nd win of the season. (File)

ALABASTER – Colin Lillie hurled 103 pitches over the span of seven innings worth of work, gave up four hits, zero runs and struck out eight in an excellent all-around complete game effort against visiting Tuscaloosa County on April 7.

In the third inning, Jonathan Crawford and Riley Reach reached base on a pair of leadoff singles before Lance Johnson sent Alex Carter, a pinch runner for Crawford, home with a sacrifice offering. Reach later scored when Adam Durrett singled to left field to give the Warriors a healthy 3-0 cushion.

The 3-0 lead was all Lillie needed to bring home the win for the Warriors, however Thompson added two more runs in the fifth and sixth inning respectively to win the game 7-0.

Durrett went 3-for-3 from the plate with a pair of RBIs in the contest to lead the way for Thompson from the plate. Septhan Poplin also was perfect from the plate with a 2-for-2 day and had two RBIs as well. Chris Lewis, Crawford, Reach, Johnson and Haskins all registered one hit on the evening, which accounted for all 10 of the Warriors hits on the day.

Thompson advanced to 22-9 on the year with the win, and the Warriors will finish up the regular season on April 18 with a doubleheader against Enterprise before gearing up for the 7A state playoffs.