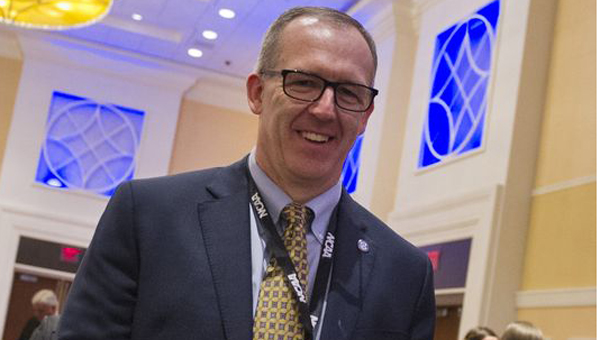 SEC Commissioner-Elect Greg Sankey is a Shelby County resident who enjoys reading and working out. (Contributed)

Come August, there will be a new face of one of the most profitable and powerful college sports conferences in the nation. When Mike Slive steps down as the Commissioner of the Southeastern Conference on July 31, he will turn the reigns over to Shelby County resident, fitness enthusiast and bookworm Greg Sankey.

A New York native, Sankey has been working for the SEC for the last 13 years, and has served as Executive Associate Commissioner since 2012. Prior to his time with the SEC, he spent the better part of seven years as the Commissioner of the Southland Conference. However, even though Sankey has spent the majority of his professional career on the executive side of athletics, he did not always envision himself stepping into the role he will soon hold.

“Really, my vision of my life was to be a teacher and a coach at the high school level,” Sankey said in an April 9 phone interview. “I know just from memory that I had hoped to be successful enough to coach at the Division III college level. Never was there a plan to ascend to the chair that I will soon occupy.”

When Commissioner Slive announced he was stepping down in mid-October of this past year, it did not take long for speculation to begin to swirl that Sankey was the obvious choice to fill the role. His background as a compliance officer and his reputation as an intelligent, driven and methodical problem-solver seemed to make him the frontrunner for the position. Sankey however did not concern himself with these rumors.

“I knew there was an opportunity for me to be considered,” Sankey said. “I never assumed for one moment that I would be the next commissioner. I am grateful to emerge as the next commissioner, but never once did I assume it was going to be me. For me personally it was always making sure I was fully prepared for the job.”

Sankey, who has had two daughters graduate from Briarwood Christian School, may soon be stepping into one of the most high-powered jobs in the country, however that does not excuse him from dealing with some of life’s more mundane and aggravating situations.

“If I could find a way to perfect one thing, other than my faith, it would be fixing 280 traffic,” he said in a tone that was only somewhat in jest.

Sankey is an avid fitness enthusiast (his personal record marathon time is 3 hours, 53 minutes), an insatiable reader and a man of faith. He once ran one marathon a month for a year.

“I’ve run 41 marathons in total,” Sankey said. “The marathon a month for a year took a bit of a toll. I needed something else. I’ve been challenging myself to Iron Tribe Fitness on 280. I generally go at 5:15 in the morning, it’s the only time traffic on 280 is light.”

When he has the time, Sankey enjoys reading whatever he can and makes sure to get home to New York in the summers. As he starts the next chapter of his life with the nation looking on, Sankey will play a large role in the future of collegiate sports by day, and return to Shelby County by night.