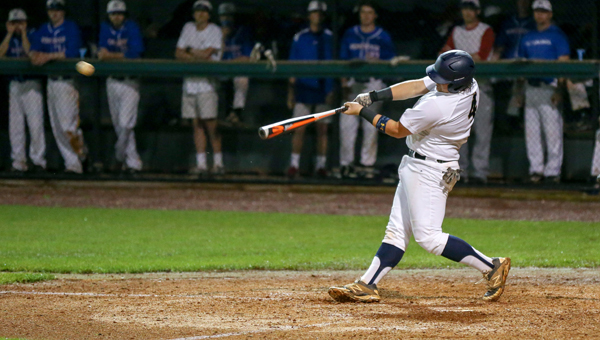 John Michael Pegusky connects with a pitch during Briarwood’s 12-7 win over Homewood on April 10. With the win the Lions secured the 6A Area 9 title. (Contributed / Todd Kwarcinski)

NORTH SHELBY – The Briarwood Christian baseball team willed its way to a 12-7 victory over a talented Homewood squad on Friday, April 10, at Jay D. Kynerd Field, clinching the 6A Area 9 title in what proved to be the regular season finale for both teams.

“Homewood is the team to beat,” Briarwood head coach Steve Renfroe said after the game, referencing this year’s looming 6A state playoffs.

But regardless of the Patriots’ vaunted reputation, their presence in the opposing dugout did not pose the greatest obstacle to a Briarwood triumph. The error-plagued Lions took care of that on their own, committing a number of costly defensive lapses in the game’s early innings.

“We were really sloppy, really sluggish mentally, made four or five mistakes that didn’t even show up on the board and found ourselves down against a really good team,” Renfroe said.

But thanks to their potent offense, the Lions twice battled back from three-run deficits and entered the fourth inning with the score knotted at 6-6.

John Michael Pegusky and Luis Fuentes broke the deadlock in the bottom of the fifth inning, delivering back-to-back RBI doubles to give the Lions an 8-6 lead.

After Homewood scored one run in the top of the sixth inning, Briarwood responded with an offensive outburst, plating four runs in the bottom of the frame. Fuentes came through yet again with another piece of timely hitting, lacing a two-run double to centerfield and sealing the Lions’ victory.

With the pivotal victory, Briarwood secured home-field advantage in the first round of the state playoffs. The team will begin postseason play on Friday against Chelsea.