CHELSEA – The auditorium at Chelsea High School will take on a Broadway-style atmosphere April 17 and 18 as students present Rodgers and Hammerstein’s “Oklahoma!” 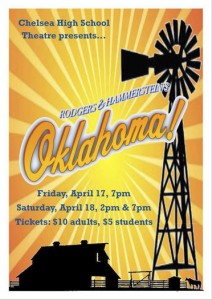 Nearly 50 CHHS theatre and choir students will have singing, dancing and acting roles in the production. Performances are Friday, April 17 at 7 p.m. and Saturday, April 18 at 2 p.m. and 7 p.m.

The musical is set in the early 20th century and contains elements of love, humor and danger, with “farmers pitted against cowboys,” according to CHHS choir teacher Kay Dick, who is the musical director for the school’s “Oklahoma!” production.

“It’s about the state of Oklahoma actually before it became a state,” Dick said. “It is a love story as well. It’s got everything.”

Tickets are $5 for students and $10 for adults and can be purchased at the door before each performance.

Concessions will be sold at Curtain Call Cafe at all performances.

Proceeds from the cafe will go toward renovating the auditorium, Dick said.

Flowers will also be available to purchase for performers.

Dick said the musical has helped students to enjoy theatre and to learn more about history.

“It’s a wonderful process, and it’s very meaningful to them as part of their high school experience,” she said.

CHHS theatre teacher Francie Gardner is the director of the musical.
Assistant directors are Ann Murphy and Kendra Bridgham.

The Alabaster City School System agreed to pay off $356,454 in outstanding debts during an April 13 meeting, (File) By... read more