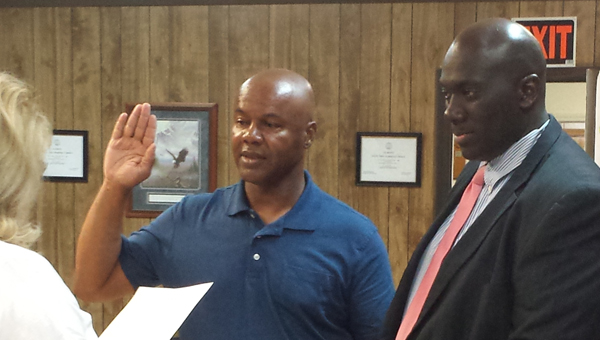 Jimmy Macon was sworn in as the new chief of the Harpersville Police Department during an April 6 City Council meeting. (Contributed)

HARPERSVILLE—There’s a new face in Harpersville. Jimmy Macon was sworn in as chief of the Harpersville Police Department at an April 6 City Council meeting.

A Tuscaloosa native and veteran with more than 20 years of service in the United State Army, Macon has experience at all levels of law enforcement, and his career has taken him across the country.

“I’ve done (everything from) narcotics to K-9 to investigations to patrol to traffic,” Macon said of his nearly 20-year career.

Macon began his law enforcement career in 1996, working with a sheriff’s department and a municipal police department in Florida.

“After I retired (from the military), I moved to Florida and became a police officer there,” Macon said.

He lived in Florida until 2013, when his career took him to northern Minnesota to serve as chief of the Hawley Police Department.

After 20 months in Minnesota, Macon received news that his mother had been diagnosed with dementia. He decided to return home to Alabama to care for her.

“I was going to quit law enforcement all together and just take care of her,” Macon said. However, the opportunity with the Harpersville Police Department allowed him to continue his career.

With a daughter in Atlanta and a son soon relocating to Birmingham, the move to Harpersville not only brought Macon closer to his mother, but also to his two children.

Just three weeks into the job, Macon has already fallen in love with the small-town charm of Harpersville.

“I love it,” Macon said of his new hometown. “I like the small town atmosphere because you get to know the people better and they get to know you.”

Macon said he looks forward to getting out and meeting the citizens of Harpersville.

“I’m an outdoor person, I’m not one to be stuck in an office or anything,” Macon said. “I want to be a chief that everybody knows.”

Macon took charge of the Harpersville Police Department following former Chief David Latimer’s retirement in February. David Bearden served as interim chief. A meet and greet session with Macon will be held at 5:30 p.m. at the April 20 City Council meeting.

“I want to come here and make sure we’re a safe community, that’s the number one priority,” Macon said. “I want to make Harpersville the number one city in the state of Alabama, if not the country, for its safety.”

The Alabaster City Council approved the demolition of a burned-out house at 151 Daisy Lane during a recent meeting. (Contributed)... read more