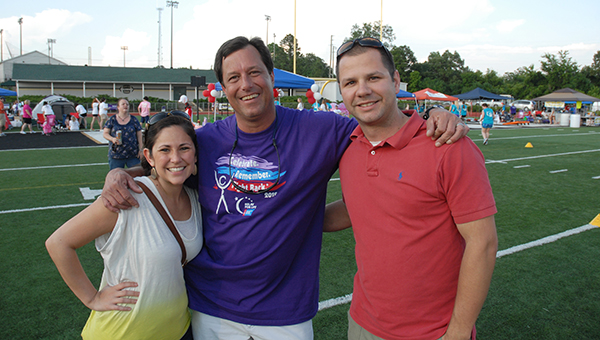 Hundreds of people show up each year to help raise money for the American Cancer Society by participating in Relay for Life. (File)

HELENA–Cancer research has come a long way in the past decade and one of the main reasons is because of efforts such as Relay for Life and numerous other events that have helped raise funds for the American Cancer Society.

On Friday, April 24, the city of Helena will host the annual North Shelby Relay for Life at the Helena Sports Complex from 6 p.m. to midnight.

Prior to the event, numerous shirts have been sold donning the phrase “give cancer the boot.” This year’s Relay for Life has a western theme and teams at the relay will show off their best western wear.

Relay for Life Community Manager Katherine Talty said she is excited about the relay being in Helena and loves getting involved in Relay for Life because cancer affects so many people.

“It’s the first year it’s being held in Helena, so it’s exciting,” said Talty. “My uncle passed away from melanoma and that’s how I got involved, and I really believe in what the American Cancer Society is doing. What they’re doing is making a difference and donations are also making a big difference.”

A survivors’ walk is set to begin just after 6 p.m. and anyone who has been diagnosed with cancer is encouraged to walk.

The relay will be held in a field next to the sports complex, but if the weather becomes an issue, the event will be moved indoors into the recreation center.

The Birmingham-based band Livewire will be performing, a dunking booth will be set up to dunk members of the Helena Police Department as an on-site fundraiser, games for kids, Zumba, catered food and more will highlight this year’s relay.

One of the special parts of the relay will take place at 9 p.m. when the luminaria ceremony is held to remember those who lost their lives to cancer.

Talty reiterated that the luminaria ceremony is one of her favorite parts of the night.

“I would say the luminaria ceremony is special to me, and the event is such a great cause and the community just comes together,” said Talty. “It’s important to come together to heal and to fight for the cause.”

More information on the North Shelby Relay can be found at Relayforlife.org/northshelbyal.