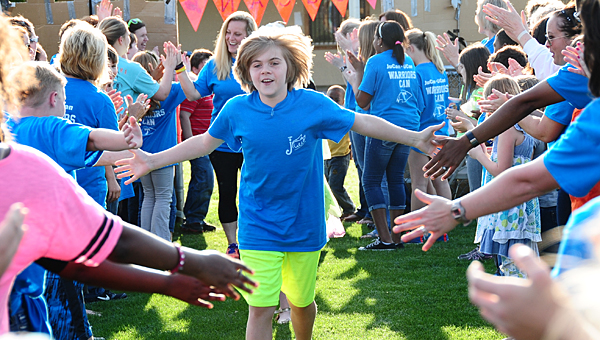 Jonathan David Cobb sprints through a crowd of Alabaster residents, teachers and students as they welcome his family to Buck Creek Park on April 20. (Reporter Photo/Neal Wagner)

ALABASTER – Of all the experiences Jonathan Cobb has had while walking 3,000 miles over the past several months, he was sincere about ranking his stop in Alabaster among the top.

“To hear all those students chanting your tagline, it’s pretty extraordinary,” Cobb said shortly after arriving at Alabaster’s Buck Creek Park on April 20. “When you ask what the most memorable part of our journey has been, I might have just had it. I really do mean that.”

Jonathan, his wife, Jennifer, and their children Jonathan David, Jenna and Jaxi set off from Disneyland in Anaheim, Calif., in August 2014 on a walking journey to Disney World in Orlando, Fla.

The family decided to undertake the more than 4,000-mile trek in honor of their child and sister, Julia, who died in 2013 at the age of 6 after battling Ewing’s sarcoma, a rare bone cancer.

Through the trip, the Cobbs are working to raise money and awareness to combat pediatric cancer, which only receives about 4 percent of all cancer research funding, Cobb said.

Although the family had only reached Tupelo, Miss., on foot on April 20, they took a break to visit Thompson Intermediate School before returning to Tupelo to continue on their journey.

After speaking to TIS students during the school day, the Cobb family was welcomed by dozens of Alabaster students and parents at Buck Creek Park at 5 p.m. during the “Let it Glow” cancer awareness party.

During the party, which was emceed by 102.5 The Bull’s Dollar Bill and Madison, visitors purchased glow sticks and balloons to benefit pediatric cancer research while most in attendance wore “JuCan” shirts displaying the Cobbs’ tagline.

To learn more about the family’s trek, visit Jucanfoundation.org.

Throughout the journey, the Cobbs have averaged between 20 and 25 miles per day while rotating walkers daily. After setting off from Tupelo again, the family will travel through Birmingham and Atlanta before heading south to Orlando.

“We are looking to hit Orlando maybe by the end of June,” Cobb said. “We want to get there safely and accomplish our goals, so when we get there is the least important thing.”