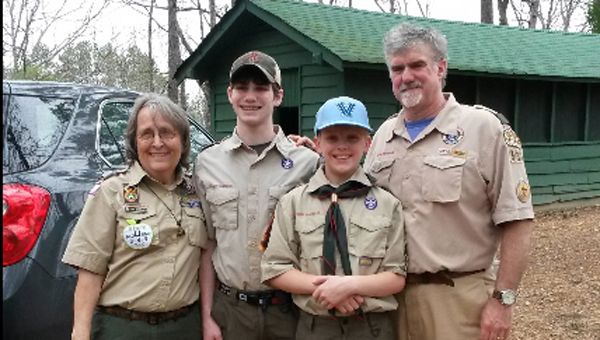 Kay Dummier, left, with son Jeff, right, and two grandsons, has been involved with Boy Scouts of America for 42 years. (Contributed)

For 42 years, Kay Dummier of Pelham has been actively involved with the Boy Scouts of America that began when Dummier’s son, Jeff, then age eight, joined the cub scouts. Shortly thereafter, she became his den mother. Dummier immediately took pride in the fact that she believed she was helping these young men build character by being a positive influence in their lives.

Dummier is now primarily a counsel club person, a position that sets up and organizes all of the activities for the scouts throughout the state. She is also involved with the district and troop communities. Among the three, the council position is the most demanding.

“It gives me great pleasure to set things up,” said Dummier. “I’m good at getting people to do these activities. I get a lot of pleasure getting things accomplished for the kids.”

The scouts are taught a variety of different skill sets in order to earn merit badges. Some badges are even based on the specific interests that each individual child might have. First aid, outdoor skills, engineering, flying, and even veterinary practices are some of the many activities that the scouts will have a chance to engage in.

“Any interest you have for merit badges, they got it,” Dummier said. “The purpose of the merit badges is to make the scouts more well-rounded and to teach them to be good men.”

In Shelby County alone there are between 1,900-2,000 boy scouts and cub scouts. However, the council that Dummier sits on has close to 27,000 scouts in its five camps. This is composed oftwenty-two counties in North Alabama.

Even after all these years, she is not showing signs of slowing down or retiring any time soon. “I plan to keep going for as long as I’m still enjoying it,” she said.

This Saturday she can be found at the annual council Pinewood Derby in Talladega where, as always, she will be earnestly involved.