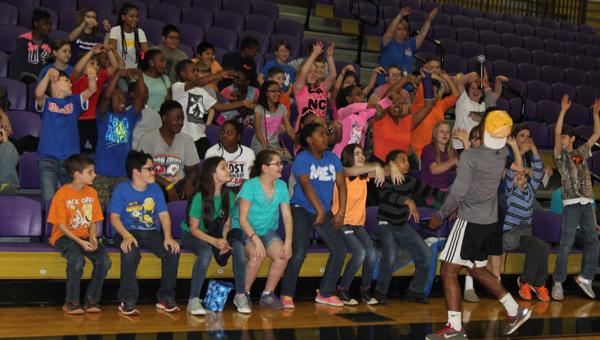 Montevallo fifth-grade students do “the wave” during the first ever Future Falcons Day at the University of Montevallo. The event was led by current coaches and student-athletes at the University. (Contributed)

MONTEVALLO – The University of Montevallo athletic department invited nearly 100 fifth-graders from Montevallo Elementary School to the Robert M. McChesney Student Activity Center for a fun-filled day of competition involving basketball, soccer and running skills in early April as part of the first ever Future Falcon Day.

The event gave the fifth-graders an opportunity to connect with current University of Montevallo student-athletes and members of the Falcons’ coaching staff on National Student-Athlete Day, celebrated annually by the NCAA and its member institutions.

The fifth-graders opened the event by joining classmates as part of teams representing countries in an Olympic-style format, learning facts about the countries they represented from Montevallo student-athletes and coaches.

“We’re thrilled to serve as a partner with Montevallo Elementary School to enrich the lives of the fifth-grade students,” said Montevallo Athletic Director Mark Richard. “Our coaches, student-athletes and administrative staff thoroughly enjoyed working with the youth. The students had a tremendous energy level and I would like to thank Dr. Allison Campbell and the fifth-grade teachers for allowing the students to be part of Future Falcon Day.”

The students competed against each other in basketball, soccer and track and field events, while also enjoying fun activities in between, before sharing pizza and chips for lunch.