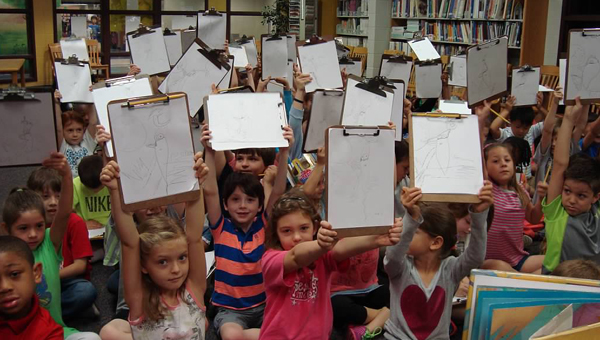 An eight-year tradition at the school, Young Authors Week aims broaden students’ understanding of where writing can lead by introducing them to a variety of professional writers and authors.

“We’re just trying to get the kids interested in all kinds of writing,” Greystone Elementary School Library Media Specialist Julie Richey said. “We’re just letting them know there’s all different kinds of writing, no matter what their interests are.”

On Monday, April 20, students got to draw along with children’s illustrator, Michael P. White. White illustrated “The Library Dragon,” a book Richey said she reads to all of her students.

“They loved him,” Richey said. “They drew with him. They were drawing awesome pictures of sharks, sea turtles (and more).”

Shelley Gill visited the school on Tuesday, April 21. She’s not only an Iditarod competitor and resident of Alaska, Gill has authored more than 25 best-selling books.

“They asked a lot of good questions about her travels, her writing and her research,” Richey said, noting Gill also researches hump back whales.

Students also explored how music and writing mix with storyteller and drum circle facilitator, David Holland, On April 22 and 23.

“He tells folk tales, but he puts them to music,” Richey said. “There’s a lot of interaction with the students, there’s clapping and singing along with him while he’s telling the stories.”

Throughout the week, students are also recognized as authors in the school’s Young Authors Showcase. Student writing projects, from poetry to digital work, are displayed throughout the school and visitors are invited to browse the student creations.

“They get so many ideas,” Richey said. “No matter what your interests are you can always find something.”