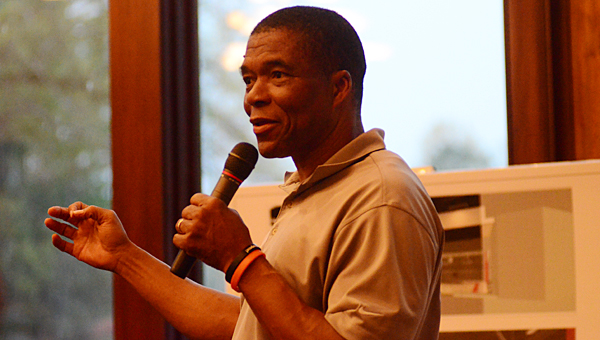 ALABASTER – A current contestant on Dancing with the Stars will not be speaking at the Thompson High School graduation due to contractual obligations with the show, and a former Alabama football great will take his place as the graduation’s keynote speaker.

In January, the Alabaster City School System had finalized a deal for Alabaster resident, former U.S. Army sergeant and current Dancing with the Stars contestant Noah Galloway to be the featured speaker at graduation.

“We had originally confirmed with Noah Galloway in January to be the keynote speaker,” ACS Student Services Coordinator Dorann Tanner wrote in an email. “In late March, we were informed that due to his contractual obligations to Dancing with the Stars, he will no longer be able to honor the commitment. We tried to work with him to do a pre-recorded speech for the ceremony but unfortunately he was unable to work it out.”

The graduation ceremony will begin at 6 p.m., at which time about 400 THS students are expected to receive their diplomas, Tanner said.

After the deal to bring Galloway to the graduation ceremony fell through, ACS worked to schedule former University of Alabama football standout Jeremiah Castille as the speaker.

“We are thrilled that Mr. Castille has stepped in!” Tanner wrote.

In late March, Castille spoke to those who participated in the Alabaster School Foundation golf tournament on March 26 at Timberline in Calera. During his speech, Castille praised Alabaster City Schools for investing in new facilities and programs for its students.

After serving as an assistant coach and head track coach at Briarwood Christian School from 1995-2002, Castille founded the Jeremiah Castille Foundation to help those in need.

Emergency responders extract Chelsea High School students from the scene of a simulated car crash during the Every 15 Minutes... read more