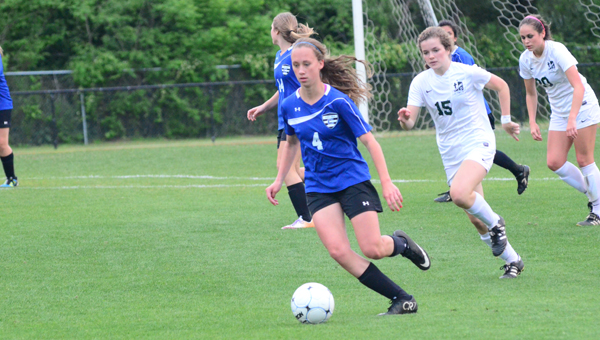 Kaitlyn Willis makes a move during Chelsea’s 6-1 loss to John Carroll Catholic in the first round of the 6A state tournament on April 24. (Reporter Photo / Baker Ellis)

BIRMINGHAM – The defending 5A girls’ soccer state champions John Carroll Catholic showed on Friday, April 24 why they are one of the most talented squads in the state. Talented upstart Chelsea, the Area 10 runners-up, came into the game with a 13-8-1 record, and were ranked fifth in the state in class 6A. The top-ranked team in 6A, unsurprisingly, was the Lady Cavaliers of John Carroll Catholic. The two teams had played once before this season, on March 26, when the Lady Cavaliers thumped the visiting Lady Hornets by a final of 6-0. This go-around, the stakes were higher, but the result was essentially the same, as John Carroll walked away winners by a final of 6-1.

From the outset, the Lady Cavaliers showed they were the superior team, as they have done for most of the season against all teams they have faced. They knocked in three goals by halftime and all but stymied the Lady Hornets attack.

The second half was more of the same, with a quick John Carroll goal giving the Lady Cavaliers a 4-0 lead, and a penalty kick at the 27-minute mark gave the home team a 5-0 lead. Finally, with 16 minutes left to play, Madison Carter of Chelsea knocked one past the John Carroll keeper to give the Lady Hornets their first goal of the game and of the year against the Lady Cavaliers. However, John Carroll scored once more in the waning minutes of the game, and won 6-1.

Chelsea finished the year with a 13-9-1 record, which included two wins against Class 6A No. 10 Homewood. The Lady Hornets tied their win total from a year ago, the highest since 2012.

Kelsey Vining was named the Peach Belt Conference Freshman of the Year and was awared a place on the First... read more