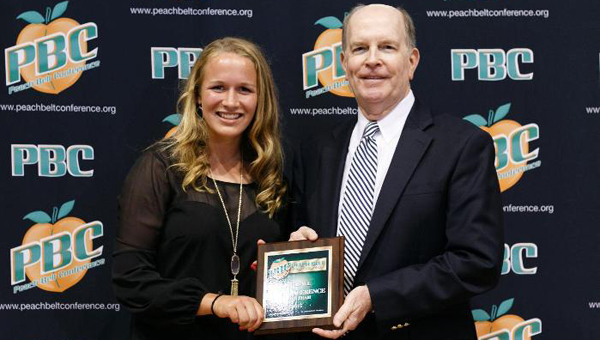 Kelsey Vining was named the Peach Belt Conference Freshman of the Year and was awared a place on the First Team All-PBC on March 23. (Contributed)

Vining, a Plano, Texas native, has excelled for the Falcons in the first year in program history, leading UM to a sixth place finish in the PBC and a bid in the conference tournament.

She will go down in history as the first Montevallo softball player to ever win a major postseason award. The freshman leads UM with a .376 batting average and 12 doubles. Vining leads the PBC with her 33 stolen bases on the year. She has also been perfect defensively, not recording an error all season. Vining was also selected to the NFCA Top 25 Finalist list for the National Freshman of the Year Award earlier this month.

Montevallo will take to the diamond today, squaring off with Armstrong State in the first round of the PBC Tournament.

In the regular season, the Pirates and the Falcons split a pair of games.