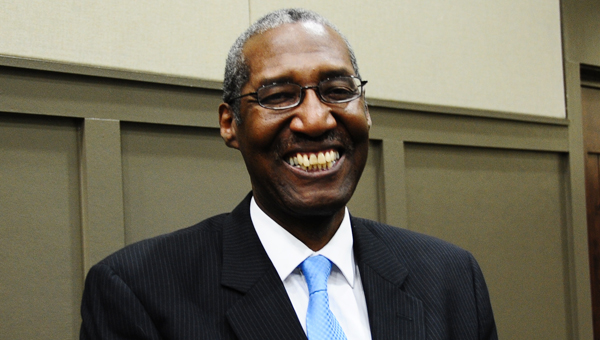 The Alabaster City Council voted unanimously to reappoint Derek Henderson to the city’s Board of Education during an April 27 meeting. (Reporter Photo/Neal Wagner)

ALABASTER – Alabaster Board of Education member Derek Henderson will serve on the School Board for at least another five years after he was reappointed to the position during an April 27 City Council meeting.

Henderson originally was appointed to the School Board in May 2013 to fill a vacancy left by the March 14, 2013, resignation of former School Board President Melanie Shores.

Henderson is a retiree from the insurance field and is the past president of the Thompson High School Quarterback Club.

“Thank you,” Henderson told council members after they voted to reappoint him. “I’m humbled by the reappointment, and I hope to do the best job I can.”

Before the reappointment, Henderson’s term was scheduled to expire in June. His term has now been extended through June 2020.

During an April 21 work session, council members praised Henderson for his involvement in the Alabaster City School System and City Council President Scott Brakefield called Henderson “by far our most active board member.”

Henderson frequently attends city school functions and events, and has been mentoring a group of five Thompson Middle School students since August 2013.

Through the mentorship program, Henderson visits the students each week to chat about grades, set school goals and sometimes even play basketball.

Linda Church, who is also an original member of the School Board, currently is serving a term ending in June 2016.

Bethany Rogers looks to make a move during Calera’s April 25 10-0 victory over Ramsay. This was a first round... read more