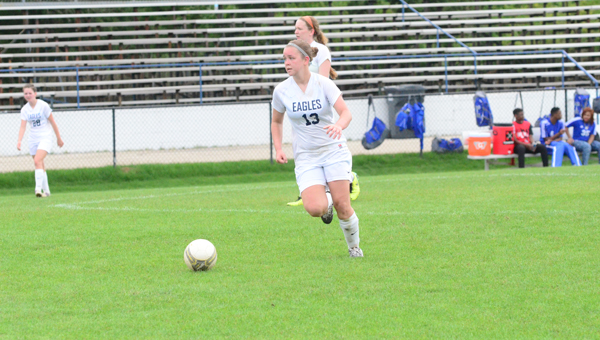 Bethany Rogers looks to make a move during Calera’s April 25 10-0 victory over Ramsay. This was a first round game in the AHSAA 4A-5A state tournament. (Reporter Photo / Baker Ellis)

CALERA – The Calera Lady Eagles soccer team wrapped up Area 7 with a 4-0 record when they defeated Helena for the second time in a row on April 20 via a 5-1 decision. That put the Lady Eagles’ record at 7-3 on the year. Directly after they finished their undefeated romp of Area 7, however, the Lady Eagles lost back-to-back games to 1A-3A power Indian Springs and 6A power Chelsea by a combined score of 9-0 to end the regular season on a less than ideal note.

However, in the first round of the state tournament, Calera turned any negative momentum around in a hurry, as the Lady Eagles turned away visiting Ramsay via a 10-0 mercy rule decision to advance to the second round of the 4A-5A playoffs.

Ramsay was a completely overmatched opponent that had only won two games all year, against a struggling, fellow Area 8 A.H. Parker team. Ramsay sported a 2-9 record coming into the contest with Calera, and had only managed to score two goals all season in games not played against teams not named A.H. Parker. The game was over from the beginning. Calera controlled the ball for the entirety of the game, and had no trouble advancing into the attacking third whenever it felt the need. The Lady Eagles were stuck on nine goals for a solid chunk of the second half before, with under 10 minutes to go in regulation, the 10th goal came and ended the game early.

With the win, Calera advances to the second round of the playoffs since 2013. Calera will take on Carver High School on April 28 at 7 p.m. for a chance at the quarterfinals.

The Alabaster Board of Education voted to hire Judy Green as the new Thompson High School volleyball coach and director... read more