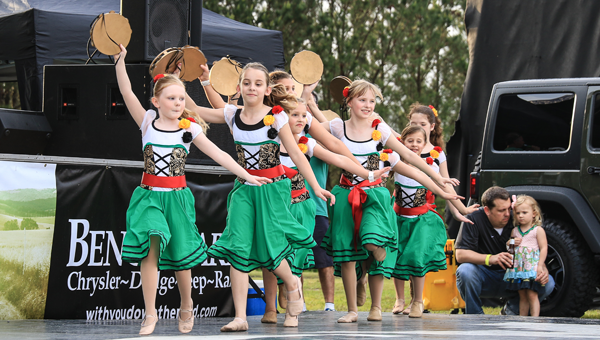 BIRMINGHAM – Johanna Giaradina Potter can remember a time when Catholic feast days were held often in the Birmingham area.

“When we were young, we would have feasts all the time,” she recalled.

On Saturday, Potter joined thousands of other Italian-Americans and those who simply appreciate Italian culture – and food – for the fourth annual Feast of St. Mark Italian Food Festival, hosted by Saint Mark the Evangelist Catholic Church on Highway 119.

The event was a day-long celebration of Italian food, music, community and culture starting with a special Feast Mass beginning at 3 p.m. Following mass, Birmingham Mayor William A. Bell, Sr. spoke to the crowd about the city’s Italian community and the importance of cultural diversity.

Francavilla said they offer 3,000 tickets each year, and the event typically sells out beforehand.

The Italian-American Heritage Society of Birmingham sponsored a booth and had many members in attendance. Club member Leon Chiarella said the club is made up mostly of second, third or fourth-generation descendants of Italians and Sicilians who settled in the Birmingham area around the turn of the century.

“The purpose of the club is to come together and practice the traditions and customs handed down to us by our ancestors,” he said.

Bishop L.D. Barber and Bishop Chellee Barber broadcast the event live for Kingdom Radio Network throughout the afternoon and evening. Festival goers visited the duo to share their thoughts on the event, which celebrates St. Mark, who is the church’s patron saint.

Students at Chelsea Middle School portrayed characters in different historical time periods during a Night at the Museum program on... read more