Pelham takes out Homewood in double OT, advances to 6A quarterfinals 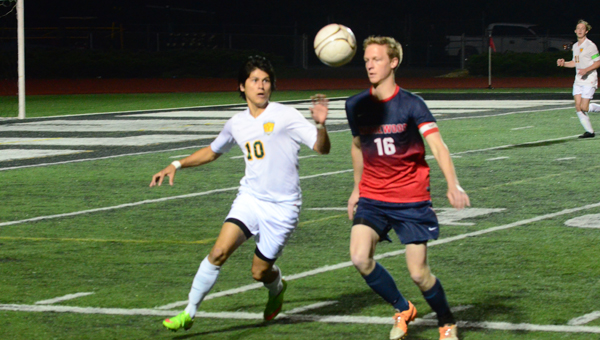 Amilcar Canas Aguilar, left, of Pelham, fights a Homewood player for the ball in the early going of Pelham’s second round 6A state tournament game with Homewood on April 28. The Panthers scored a goal in overtime to knock off the Patriots 1-0 and advance to the third round of the 6A playoffs for the first time in school history. (Reporter Photo / Baker Ellis

PELHAM – Pelham continued its trend of winning games in the 6A state tournament in the most dramatic and cardiac-detrimental ways imaginable on April 28. Just days after Pelham defeated John Carroll Catholic on a last-second corner kick, the third-ranked Panthers hosted the fourth-ranked Patriots of Homewood in the second round of the 6A playoffs and knocked Homewood out of the tournament in dramatic, overtime fashion.

From beginning to end on this night, there was rain. The field, ball and players were wet from the opening whistle as the skies dropped varying amounts of rain on the pitch over the course of the 87-plus minutes of game action. To go along with the less than ideal weather, there was a solemn moment with 27 minutes left in the first half as a Homewood player had to be taken off the field via ambulance with what appeared to be a severe knee injury. After he was carted off and received a supporting offer of applause from both home and visiting fans alike, both teams settled in to the soggy game.

While the weather may have left something to be desired, the play on the pitch certainly did not. Homewood was roughly three inches bigger and a half step faster than Pelham at seemingly every position, and spent the majority of the first half within striking distance of the Panthers’ goal. Pelham may have been physically smaller, but the Panthers were so technically sound and always in good position that Homewood could not take advantage of their ample possession time. The Panthers’ defense bent, however did not break, and weathered the first half offensive storm to a 0-0 tie.

The second half was more of an even affair. The skies opened up and much of the second half was played in a veritable downpour, and the product on the field faltered as both teams tried to get their bearings on the wet and slippery terrain. After 80 minutes, the score remained tied 0-0, and the teams headed for two five-minute golden goal periods.

After five more scoreless innings, this game looked to be headed toward penalty kicks. However, fortune was once again on Pelham’s side. With under four minutes to play in the second golden goal period, there was a flurry of activity inside the Homewood box which resulted in the ball hitting off the top of the crossbar, ricocheting straight up in the air before falling onto the foot of Oscar Navarrete Cruz, who nudged the ball inside the left post to give the Panthers the win.

Homewood immediately protested, petitioning the referees that the ball had in fact hit the bottom of the field goal post, located roughly six inches above the top of the goalpost, and should have resulted in a corner kick. After a minute of confusion, the referees held firm to their original call, and Pelham escaped with the 1-0 win.

Regardless, Pelham and Homewood played an exceptional game, with the Panthers making one more play at the end to come away with the result. With the win, Pelham now turns its attention to ninth-ranked Southside Gadsden for a shot at the Final Four.

By BAKER ELLIS / Sports Editor TUSCALOOSA – Both Pelham and Chelsea competed in the ACA track and field sectional... read more