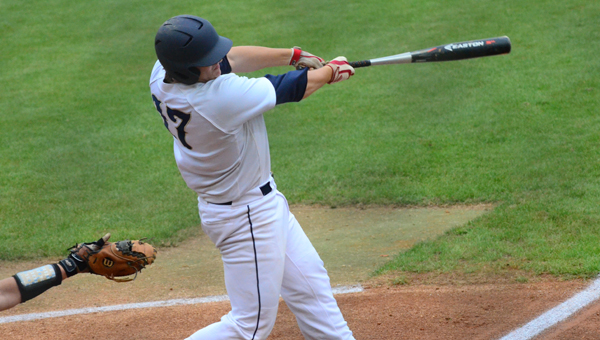 Carter Bankston and the Briarwood Christian Lions lost two of three games to Pinson Valley in the third round of the 6A state playoffs on May 1-2. The Lions ended their season with a 25-9 record. (Reporter Photo / Baker Ellis)

PINSON – After winning the first game of the third-round playoff series against Pinson Valley, the Briarwood Lions (25-9) dropped back-to-back games against the Indians to end their season in an abrupt manner. The Lions won the first game 4-2, but dropped the second game 7-4 to force a game three, which took place on May 2. The third game also went the way of the home team, as Pinson Valley won the last game by an identical 7-4 score to advance to the 6A semifinals and knock the Lions out.

Sam Strickland started the final game for Briarwood and threw 3.2 innings, gave up five hits and four runs, just one of which was earned, and struck out three before being replaced by Harrison Cain. Cain finished the remaining 3.1 innings in just 36 pitches, striking out two while giving up three hits and three runs, none of which were earned.

The Patriots took a 4-1 lead into the sixth inning before scoring a backbreaking three runs in the sixth to take a nearly insurmountable 7-1 lead. Back-to-back errors at the start of the seventh crippled the Lions from potentially getting out of the inning unscathed. Briarwood added one run in the bottom of the sixth, and held Pinson Valley scoreless in the top of the seventh.

The Lions beat Homewood in the third game of their second round series in the bottom of the ninth inning after scoring three runs to win that series, however did not have the same result this time around. Briarwood managed two runs in the bottom of the seventh, but the comeback attempt, and the season, fell short.

Pierce Merry and Carson Eddy led the way from the plate for the Lions in the swan song performance, registering two hits apiece.

Briarwood ended its season with a 25-9 record.

Pelham stays undefeated in playoffs, advances to 6A semifinals

Sam Finnerty throws a pitch in the first game of the Panthers third-round matchup with Hillcrest-Tuscaloosa on May 1. Pelham... read more