Oak Mountain gets past Hoover in penalty kicks, advances to state semifinals 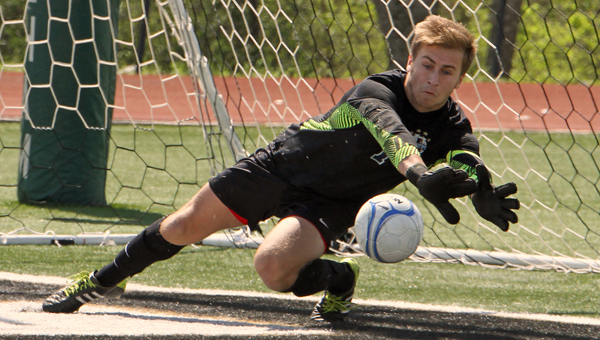 Ryan Dearman and the Oak Mountain Eagles defeated Hoover in penalty kicks on May 2 in the second round of the 7A state playoffs to make it back to the Final Four for the fifth consecutive year. (Contributed / Omhsboyssoccer.com)

HOOVER – The boys from Oak Mountain had played Hoover three times prior to their meeting on May 2, and the Eagles won two of the first three contests. Over the course of the year, the two teams have become increasingly familiar with each other, and met for the final time on May 2 to determine who would go to the 7A Final Four and who would go home.

The Eagles struck first in the fourth meeting when Trigg Langner knocked one past the Hoover keeper midway through the first half to put Oak Mountain out in front. The Bucs controlled possession late in the half and had a number of good looks on the Oak Mountain goal, but could not put one in, and the Eagles led at the half 1-0.

Clay McDonald seemed to have added the second goal for the Eagles midway through the second half, however was called offside. The teams traded chances for most of the second half, and with six minutes remaining in the game Hoover finally drew even on a free kick to tie the game at 1-1. Neither team could change the deadlock in the remaining six minutes of overtime, and the game headed to overtime. After 10 more minutes of scoreless soccer, the game headed to penalty kicks.

McDonald, Langner, Chad Jeter, Kennedy Davis and Hunter Ratliff took the five penalty kicks for Oak Mountain. McDonald netted the first, and so did Hoover. After Ratliff nailed the second, Hoover missed to give the Eagles a one-goal advantage. Jeter hit the third, as did Hoover before Davis knocked down the fourth to give Oak Mountain a 4-2 advantage. After Hoover made its fourth attempt, Langner had the opportunity to end the game with the fifth try, and did just that, slamming his attempt past the Hoover keeper to send the Eagles to Huntsville for the 7A Final Four.

Oak Mountain has now made the semifinals each of the last five seasons, and had to beat No. 2 Vestavia and No. 4 Hoover to achieve this most recent trip. The Eagles will now take on state No. 1 Bob Jones on May 8 for a shot at the state title.