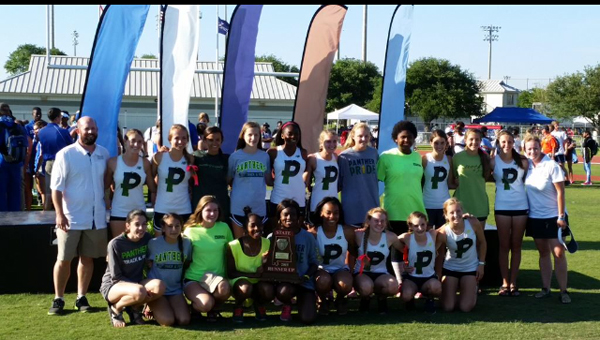 The Pelham Lady Panthers finished runners-up in the 6A state meet in Gulf Shores, which took place from April 30-May 2. (Contributed)

GULF SHORES – The 4A-7A state track and field meets took place in Gulf Shores from April 30-May 2, and a number of Shelby County teams fared well. Both the Oak Mountain and Spain Park boys’ teams placed in the top 10 of the 7A boys meet, however the county top finisher in Gulf Shores was the Lady Panthers of Pelham, who placed second in the 6A girls meet with a total of 79.5 points.

The Lady Panthers had a number of top competitors shine on the biggest stage of the season, and, as they have all year, relied on Mary Grace Strozier and Erin Hines to lead the way. Strozier, Pelham’s resident middle-distance and long distance speedster, won the 1,600-meter run by over four seconds, placed third in the 800-meter run where she missed first place by less than a second, and finished fourth in the 3,200-meter run to give her 21 total points in her three individual races to lead the way for the Lady Panthers. If Strozier would have been the only athlete to score points for Pelham, the Lady Panthers would have still finished 13th in the state meet out of 25 teams.

Hines competed in four individual events and fared equally as well as Strozier. Hines placed second in the 400-meter dash, missing first place by .67 seconds. She also placed fifth in the 300-meter hurdles, finished in a three-way tie for fourth place in the high jump and finished fourth in the long jump to give her 21 total points as well. Strozier and Hines in their individual events combined for 42 of the Lady Panthers 79.5 points, good for over 50 percent of the teams total points.

The girls’ team for Pelham started their season with an indoor state championship, and finished with a runner-up trophy in the outdoor season.