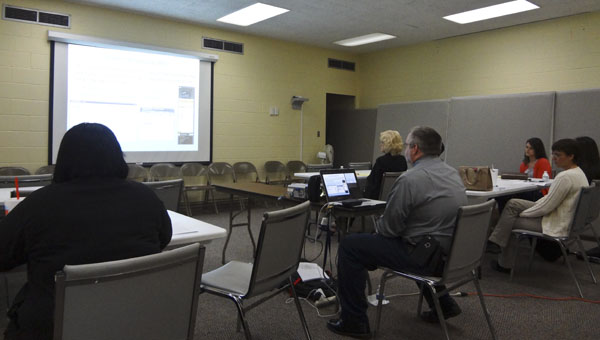 Shelby County Sheriff’s Office Investigator Mark Hughes talks to a group at the Mildred B. Harrison Library about Internet usage and safety for children and teens on April 29. (Reporter Photo/Emily Sparacino)

“Generally, the good does outweigh the bad,” Hughes said during a presentation at the Mildred B. Harrison Library in Columbiana. “The good thing is that most kids are not getting into trouble online. The scary thing is there are predators online.”

Hughes listed cyber bullying and exposure to inappropriate content as potential pitfalls children and teens can encounter when using the Internet, along with online predators attempting to contact them.

“Predators will use the information they get from children to gain their trust and friendship,” Hughes said. “Anyone is vulnerable.”

Hughes said most victims are teens ages 13-15 and are mostly girls, although 25 percent of victims are boys.

Signs a child or teen is communicating with a predator online include the child or teen receiving gifts, calling unknown numbers, rejecting friends and family to spend more time online and getting upset when they are not online, Hughes said.

Hughes also suggested talking to children about relationships and setting a policy about meeting offline for older teens.

According to Hughes, 94 percent of teens ages 12-17 use the Internet, and 43 percent have been victims of cyber bullying.

“Distance is no longer an issue,” he noted. “If somebody knows anything about computers and wants to find out information on you and your kids, the Internet has it.”

Hughes also talked about children’s use of social media and risks involved with posting details from their lives on the Internet through Facebook, Twitter, Instagram and other sites.

Although he said most kids’ posts on social media are “generally harmless,” online predators can still locate their profiles and use personal information to manipulate them.

“Young children should not use social networking,” Hughes said. “I don’t think they should use it at all.”

The Shelby County Lady Wildcats softball team will enter the South Central Regional with a 17-8 record and a class... read more